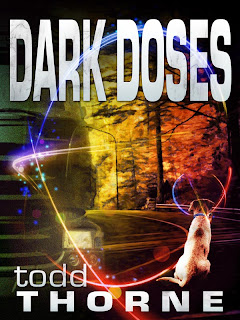 Dark Doses – speculative fiction anthology
Seven dark and gritty tales of what-if from Todd Thorne describe a troubled tomorrow on the small scale, from the eyes of a few people enduring it.
2.  How did you come up with the title of your book or series?
I was playing around with various title ideas one day and I imagined these seven tales lined up as vials containing sinister looking fluids. In walks a doctor with a stainless steel, hideously long, hypodermic. He says—in a perfect imitation of Vincent Price—“Now this won’t hurt a bit.”
Interestingly, I entertained the notion of using this cheery kind of image for the anthology cover, but in the end, I really wanted the cover to showcase one of the stories.
3.  Who is your favorite character from your book and why?
Timmy, the protagonist in the story “Game Over.” He’s in fifth grade and battling his monsters the best way he knows how to do.
4.  How about your least favorite character?  What makes them less appealing to you?
Colonel Yancy, one of the protagonists in “Perfect Soldier.” I think I did well enough drawing out the empathy for him and the position he’s in, but reading the story some 4 years after it published, I can’t help but feel he’s something of a caricature. Likely I could have remedied that at the cost of a longer tale, which we weren’t seeking at the time.
5.  If you could change ONE thing about your novel, what would it be?  Why?
That’s easy. I would have liked to commission seven works of art, one for each tale in the anthology. And, given the personal level of each story, the art pieces would have been intimate, with some kind of common thematic element to bind them together... say, lighting, perspective, color palette, aspect of menace, Alfred Hitchcock cameos, or some type of connection. Given the multimedia advantages of an e-book, the *right* use of graphics can add a touch of icing on the cake.
Alas, my family actually likes to eat on a regular basis. So just 1 dark art work instead of 7.
6.  Give us an interesting fun fact or a few about your book or series:
Six of the seven stories were published between 2007 and 2011. All were in different e-zines and one, “To Soar Free,” was also published in a print anthology called  Mystic Signals .
Somebody nominated “To Soar Free” for the 2010 British Science Fiction Association award in the short story category. I have an idea who it might be, though I’ve never confirmed my suspicion. Let’s just say: always maintain a good relationship with your editors, even if they don’t buy your story for their particular publication. Unfortunately, “To Soar Free” did not make the short list for the final award. But it was really cool to see it nominated!
I had a short chat with an engineering fellow about the virtual reality game console I came up with for “Game Over.” In the story I branded the console a Sony. This guy seemed quite serious that I talk candidly with Sony R&D because... you never know: they just might be interested in it. I thanked him kindly for the suggestion.
7.  Do you have any unique talents or hobbies?
In my day job (IT) I hold 5 U.S. patents. So perhaps I should talk to Sony and file an invention disclosure (see the previous question).
Though I’ve never been on radio, I’m told I have a radio voice. Many years ago while working in a grocery store, I used to get ‘special requests’ to give the in-store announcements, even the lame, corny ones. Who knows? Perhaps one day I’ll do a podcast or two. Hopefully not cause them to be lame or corny in the process.
I brew my own beer. Drink my own beer too. As well as other beer. And single malt scotch. Wait, I guess ‘drinking’ doesn’t qualify as a talent. So scratch all that and leave it as: I home brew.
8.  How can we contact you or find out more about your books?
Though it’s not going to win a Webby Award, my main site (http://toddthorne.com) is the place to seek me out. There you’ll find pointers to me via e-mail, Twitter, Facebook and my blog (http://dark-opus.blogspot.com/).
9.  What can we expect from you in the future?
For sure more short stories of the twisted, dark variety. Since the sale of my first flash fiction piece, “The Fisherman,” earlier in 2011 I’ve tended to churn out flash length tales. We’ll see how long that persists.
I absolutely do want to write novels. My first manuscript was not suitable for publishing, though I have ideas about how I might salvage that particular story. In any event, I have high aspirations for the novel I’m currently writing. Plus other ideas for novels keep queuing up in the mid-brain. Ideas are the easy part. Quite often though, they don’t particularly like passing through the translation filter onto the screen.
10.  Do you have any tips for readers or advice for other writers trying to get published?
If you’re a writer hoping to achieve success in the form of acclaim, good tallies, or nice sales figures, I’m a believer in J.A. Konrath’s philosophy regarding e-books. Except I think of Joe’s approach as The Killer Cookie recipe, which means:
1. It has to catch your eye,
2. It has to sound good to eat,
3. It has to look positively delicious,

4. It has to be priced so you don’t even think twice about it,

5. It has to be found where ever you want to buy it, and

6. It has to make your taste buds squeal when you munch it.


Shifting the above to your e-book, it must:
1. Have a striking cover and a title that grabs
2. Have an arresting book description, search tags and keywords
3. Have all aspects of your packaging be clean and crisp
4. Have a low or even impulsive buy price
5. Be readily available across all major store fronts
6. Be well written, engaging, compelling and error-free
Clearly, you can settle for less regarding the 6 attributes and still do reasonably well. Only you can decide, though, what ‘success’ really means to you personally. With that intention in mind, use your web references to learn about, tackle and accomplish the 6 attributes. Finally, don’t be shy about asking for help. Everybody needs it at some point.
11.  Is there anything else you’d like to say?
I’m not sure if I am supposed to spread this around, but Douglas Adams was right about 42.
12.  And now, before you go, how about a snippet from your book that is meant to intrigue and tantalize us:
From “Shadows in the Mirror” in Dark Doses :
The corner Starbucks opened at 6:30. Rachel got in at 6:15 because the kid working the drive–through had a crush on her. He waited on her personally. She rewarded him with some protracted flirting before she placed her usual order.
“How’s your husband?” love–struck kid asked over the roar of milk frothing.

“Fine,” Rachel said. Weeks ago she’d claimed being married just to stop the kid pestering her for an IM address. It wasn’t a total lie, technically.

“Why doesn’t he come in with you? Some kinda coffee allergy or something?”

“He… travels. A lot. He doesn’t like going anywhere when he’s actually here in town.”
“Oh. Guess not. Well, if you’re ever bored… want someone to do lunch with—”

“I know where you work.” She winked at him, keeping his hopes alive.

In return, he granted her his customary, generous discount. It always paid dividends to be the object of someone’s affection.

Still, Rachel held her breath until her debit card transaction cleared. Her meager balance was due to the fact she hadn’t picked up and deposited her recent paycheck—one of several items she’d neglected over the last two weeks of being out ‘sick’ due to the breakup.

Behind her, the front door popped as the lock engaged.

Rachel took her latte over and pushed on the handle. The door banged but did not open.

“Lemme get that,” love–struck kid said.

He bounded over and slid in a key from the jingling mass on his belt. The mechanism wouldn’t budge.

Lights winked out across the shop. They plunged into the predawn gloom.

The kid glanced up. “What the—

Rachel shrieked as several alarms split the air with deafening horn blasts and howling wails. Her cup thudded off her foot.

“Back door,” the kid said, screaming over the din. But it, too, stubbornly resisted the key. “What’s going on? Stupid security system’s gone nuts.”

Rachel pressed her hands hard against her ears. In the back of her mind, Edward’s voice droned his warning.

SHES VERY UPSET WITH YOU. AND YOU KNOW HOW SHE GETS.

This is crazy.” In the kid’s squeaky voice, panic overrode the alarm racket. “Let’s break glass and get the hell outta here. Come on!”

“Do you have a server?” Rachel bellowed at his retreating back.

“Have a server? A store computer.”

“With a broadband connection for wireless and security monitoring?”

“Right. In the storage closet. What—”

“Go shut it down.” When his expression reflected a preference for doing anything but, she yelled, “All of it. Hurry!” He fumbled for another key.

Rachel went and stood by the front door with the other morning shift employee, a lanky girl so terrified she looked about to piss herself. Off in the distance, red–blue strobes danced across building facades, marking the rapid approach of the police response. Just about the time Rachel decided she should raise her hands to avoid getting shot by some trigger–happy cop, the alarms silenced and the overhead lights blinked on.

Half an hour later, fresh latte in hand, she trudged back to her apartment. The store manager had been so grateful, she bestowed free drinks for the next three months, whatever Rachel craved. The kid had been absolutely starry–eyed; his puppy–love crush super–sizing to full idolization. Rachel felt like an arsonist, rewarded for helping extinguish her own blaze.

As she feared, another new message lurked in her Yahoo account. She choked on seeing the sender name.

Even worse, a snapvid accompanied the e–mail. With a hesitant finger, she clicked on the message first.

Rough morning? Too much excitement for you? So sorry. Thought you’d gotten used to such things. Oh, I forgot. You quit. Turned your back. Tucked your tail and retreated to your little fantasy world where none of this shit ever happens.

Take a long snort of that coffee, girl, and open those eyes wide. It’s all real and you have to face it. You have to face ME! Like you promised. Like you really should do.

You can’t run. Can’t hide. I can go anywhere, do anything to make you keep that promise.

Don’t believe me yet? Watch the vid.

* * *
Thank you Todd for taking part in my Author Spotlight interview! I hope your writing continues to flourish and we hope to see more of you in the future.
*****
If you or an author/illustrator you know is interested in being interviewed, feel free to send me an email at jejoescienne@yahoo.com
Posted by Jenna Elizabeth Johnson at 5:00 AM