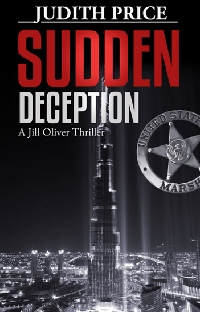 SUDDEN DECEPTION: A JILL OLIVER THRILLER The protagonist, Jill Oliver, is a contemporary American heroine—a fresh new take on the popular type of action hero previously embodied by Jack Bauer of the hit series “24” and the characters of Tom Clancy, James Patterson and other bestselling authors.

The first novel plot is about deception.  I've added deception in all three series titles

3.  Who is your favorite character from your book and why?

I love all my characters.  I would have to say Leila is one of thembecause she says what's on her mind.  Something that most people in real life struggle with.  Right now I am engrossed in Matthew McGregor as he is a psychopath and a serial killer.  I surprise myself that I can give him a voice and he scares the hell out of me.


4.  How about your least favorite character?  What makes them lessappealing to you?

5.  If you could change ONE thing about your novel, what would it be? Why?

The editor I first hired to proof read.  I've since had to hire another more thorough editor.

Some of the scenes are actual locations that I have viewed myself.  Some seem almost unrealistic.  Trust me, I live in the Middle East and they exist.

I think my creative mind is my talent.  Sometimes though I live in my stories and right now I am writing about a serial killer and it scares the crap out of me some days.

10.  Do you have any tips for readers or advice for other writerstrying to get published?

I'd really like to hear from the good folks that read my story regarding who their favorite character was and why?

00:33 Zulu Time—Somewhere in the desert outside of DUBAI, UNITED ARAB EMIRATES

There it was again—talking. In Arabic.

His left eye was swollen shut. He tried to focus his right eye as he lay in the warm sand. He couldn’t see past the glare of the lantern which hung on a pole stuck in the sand beside him. His right eye winced shut when the hard boot cracked another of his ribs. Grains of sand burned his skin like a lit cigarette as they hit his open wounds. Only the release of a breath numbed the pain. A bead of sweat dripped onto his dry tongue, stinging his split, purpled lips on the way down. He licked them anyway.


He could hear no sounds from the brightly lit city of Dubai here in the dark desert. No honking horns or colorfully lit buildings typical of the steel and concrete metropolis. There was no refuge here, no friends in the desert. He could only see silhouettes of men reflecting off the sand, and their boots. Even falling in and out of consciousness, he could recognize military-issued special ops boots anywhere. He tried to focus. The talking grew louder, shouting now; he had to think.

Just move, he ordered himself. Now.
He moved his hands ever so slightly. Nothing. They were stuck together at the wrists, bound tight. He couldn’t feel his legs—or could he? He shifted, as if to shiver. The sharp crystals of sand felt like razors against his raw skin. He was naked. His groin ached, but he couldn’t recall why. Then a moment of hope: His legs were not bound.
He searched for cognition.
Move. Survive …
But it was too late. Strong hands gripped his ankles, pulling his body fast; the sharp sand granules ripped his skin. His teeth jarred together each time his chin hit a rock. The large man hauling him across the desert's merciless landscape stopped, and before he could figure out what was happening, he was flipped onto his back. His hands dug hard into the sand underneath him. Thick fingers smelling of gasoline pried open his mouth. He choked as a mitt-full of sand was shoved into his mouth and down his throat.
“We must end this,” another man said in Arabic.
He understood Arabic and recognized this man’s voice.
Bastard.
He needed to survive. He coughed and spat, trying to breathe, gagging. A bright light swiveled closer and glared into his one open eye, blinding him. For a second, he thought he heard a whisper.
Whoosh! The smell of gasoline sizzled his nostrils. Then the pain began to soften as the light faded into blackness.

* * *
Thank you Judith for taking part in my Author Spotlight interview! I hope your writing continues to flourish and we hope to see more of you in the future.
*****
If you or an author/illustrator you know is interested in being interviewed, feel free to send me an email at jejoescienne@yahoo.com