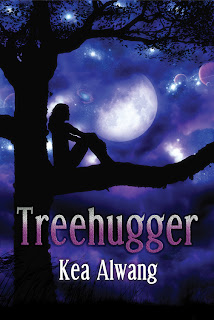 1.  Quickly, give us the title and genre of your book and a 30-word or less tagline:
Treehugger is a Young Adult Sci-fi Fantasy novel.
For fourteen-year-old Chloe, planet hopping is a gift. Leading a double life has its perks. Being Earth-born, however, simply bites. But does it really matter what world you're on when trying to find yourself?
2.  How did you come up with the title of your book or series?

When we meet the main character, Chloe, she is at a point in her life where the closest she comes to security is nuzzled up to a tree trunk. She indulges in the primitive life force of trees to feel better grounded, much as trees find a firm place in the ground by clinging to it via their roots. Trees don't play a huge role in the story, but they do symbolize the security to which Chloe attempts to cling.
3.  Who is your favorite character from your book and why?

Naturally I love the book's heroine (Chloe aka Star of Earth.) However, my favorite moments are when she interacts with one of her soul mates, CK. Talk about the opposite of a clueless male! It's not that he gets everything right, but he certainly wants to, and he knows how to make amends when he goofs. There is never any B.S. coming from CK. His honesty and ability to care despite the painful experiences he's lived with make him the best friend we all want to have.
4.  How about your least favorite character?  What makes them less appealing to you?

Definitely Professor Kroter. He is the insane genius who scarred the three core characters so badly that the effect he had on them overshadows all the other dangers they have faced in their young lives. Truthfully, I take a deep breath before writing Kroter scenes; he creeps me out, too. Fortunately, he's not based on anyone I've ever met!
5.  If you could change ONE thing about your novel, what would it be?  Why?

Well, Treehugger is Book One of a Series I titled, Based on a Dream. While the other two books have gone through their first drafts, I do wish I could have put them all together in one book so that the reader (and me) can just keep going without interruption. We wouldn't have to leave the vast expanses of space and time that is Chloe's world for a good long time! Unfortunately, that would make for a volume larger than the longest Harry Potter-a bit much. I don't think anyone would take a book that long seriously.
6.  Give us an interesting fun fact or a few about your book or series:
The three core characters came to me in a dream when I was about 10 years old, and I just never forgot them.
7.  Do you have any unique talents or hobbies?

I take martial arts classes, and my flourless chocolate torte is to die for. Then again, I find anything chocolate to die for!
8.   How can we contact you or find out more about your books?

My blog is found at www.keaalwang.com. I have a Facebook author page at www.facebook.com/keaalwang. I tweet @kea_alwang and my email is kea@keaalwang.com. Print and e-reader versions of Treehugger are available on Amazon.com, BN.com, and Smashwords.com.
9.  What can we expect from you in the future?

I'm outlining my plan for the completion and release of Book Two (title TBA) of the Based on a Dream series. But for now I would say it should be out in a couple of months. (Fingers and toes crossed.)
10.  Do you have any tips for readers or advice for other writers trying to get published?

Unless you really can't write your way out of a paper bag, don't let self-doubt mess with your head. Stories, on the whole, are extremely subjective. One person's trash is another's treasure, as they say. Some writers' books are exactly what a major publisher is looking for at the time. That doesn't mean your story won't appeal to a select few other readers or even to the masses who are ready for something new. So don't rule out self-publishing; don't rule out the story in your head.
11.  Is there anything else you'd like to say?

When they say creating a novel is like giving birth...whoever they are, they are not kidding.
12.  And now, before you go, how about a snippet from your book that is meant to intrigue and tantalize us:
"Don't."
That would be Mistake Number Two.
Tara's schnauzer let out a geriatric sigh. I only heard it because of the room's sudden silence.
Had to open my mouth, didn't I? It's just that Natalie and Gianna could handle such gossip if they knew about it. They wouldn't give a damn. Not Valerie, though. That poor girl looked haunted enough when she wasn't in anyone's cross hairs.
Nine sets of raised brows dared me to repeat myself.
"Don't what, Chloe?" accused Maura, her pointy chin jutting as if she'd like to stab me with it.
"Valerie's father left her and her mother last year," I said.
"And?"
I held my breath, wondering why that snippet of info wasn't enough to get my point across. Out of habit, I searched the air around me for the compassion and understanding I've gone without for over a year now. The reflex is useless these days, but old habits die hard when you've become completely reliant upon them. What I do sense around me is a weird sort of anxiety, the andrenalized sort of emotion people might feel if they were in a race to climb to the top of a mountain and were afraid of tripping, tumbling down, and winding up kicked out of the race.
I spoke slowly. "They were homeless four months ago; she's lucky she has somewhere to live now."
Everyone's eyes went blank, coldly stating that I still had not made my case. Only Tara appeared slightly unnerved, but not enough to do anything about it. Wow. Did I need to spell everything out?
I cleared my throat. "So she can't even hope for newer clothes. Plus, she's on the autism spectrum and gets help for her speech problem. Of course she's ... different! But, how could that be her fault? Why do you think she has so many resource room classes? Turns out she's an amazing artist, though." I stopped babbling and realized each word was digging me further into a sinkhole.
Jessica Reardon sneered, dark eyes pinning me to the wall from beneath long lashes. That was all it took for my body temperature to hit a new low. Although she is a girl of few words, anything that does come out of Jessica's mouth is going to be vicious. Shaking her long ebony hair out of her face, she tilted backward on one hand and grabbed a fistful of popcorn. "What are you, her social worker?"
The room laughed until Kerry hissed, "And what's your excuse?" Then they howled as if all the world's comedians suddenly came together in one place.
That's when self-preservation turned my thoughts inward. My eyes were still open, but the slumber party was no longer before them. A flash of the life I prefer to this one was quick to jump out of storage, ready to run interference for my thudding heart. I welcomed it into my mind's eye....
CK and I sit behind a row of thick, golden shrubs. We lean against each other; my cheek tacky against his dark-chocolate, humidity-sodden hair, our fingers intertwined just because. We feel bored, yet comfortable. Dull assignment. Dull world. Wonderful company. I am wishing we were home on our surrogate planet, Jacondor, me showing CK and Leada an Earthen movie they haven't seen. Instead, CK and I wait for a sudden call to back up Leada, if she needs our help. Her face appears in my head, too: pretty Leada who could never be as mean as Tara Hendricks' friends.

*****
Thank you Kea for taking part in my Author Spotlight interview! I hope your writing continues to flourish and we hope to see more of you in the future.
*****
If you or an author/illustrator you know is interested in being interviewed, feel free to send me an email at jejoescienne@yahoo.com
Posted by Jenna Elizabeth Johnson at 5:00 AM