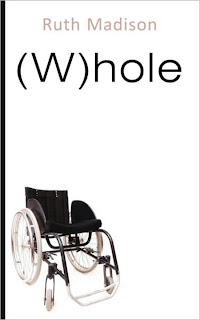 (W)hole is a coming of age romance about a teenage girl who has always had a secret desire to be with a disabled man and what happens when she meets the perfect guy.

I always knew that I wanted to somehow use the word play of the way the word "whole" and the word "hole" sound exactly the same and mean exactly the opposite of one another. I loved that. I thought it fit well with my story of a girl who feels an emptiness that she doesn't understand. It also works well for the paraplegic hero who also struggles with feeling complete. Then I had to figure out how to convey that double meaning. I tested out several versions on friends until I decided on the parenthesis. Now that it is becoming a series, I've had to find more titles that use word play in the same way! The second book is Breath(e).

3.  Who is your favorite character from your book and why?

Stewart Masterson. As much as I love and relate to Elizabeth (she is so much of me), I am totally in love with the male character. I find him and his story so compelling that I've written several short stories featuring him without Elizabeth.

4.  How about your least favorite character?  What makes them less appealing to you?

Oh gosh, this is a hard question. I have so much affection for my characters. I guess I would say Robert. He is as close to a villain as the story gets, saying some nasty things to Elizabeth in his effort to protect Stewart.

5.  If you could change ONE thing about your novel, what would it be?  Why?

I would pace it better. I've learned so much about book writing since I wrote it in 2009!  I think it is a good and strong story, but the arc is not a standard story arc and if I had kept it closer to that I think the story could have been even stronger.

This is a rather unique book/series actually!  It takes the niche genre of "wounded" or "imperfect" hero romances and pulls back the curtain on it, examines some of the impulses and desires underneath those books. It is extremely raw and honest.

I have a wide variety of interests. It surprises people to learn that I can speak Hindi, that I study classical Indian dance, and that I'm a hard-core gamer geek.

I love to hear from people, even just to open up dialogue about my unusual themes. I'm reachable at ruthmadison82@yahoo.com, at www.facebook.com/RuthMadisonDev, and of course at my website www.ruthmadison.com

10.  Do you have any tips for readers or advice for other writers trying to get published?

My tip is that the more authentic and real you can be on the page, the more it will help people. If you are able to be honest about your own weaknesses and flaws as they show in your characters, people will relate to that and be relieved to recognize themselves.

I'm so happy to have this opportunity to meet you and to tell you a little about what I do! Thank you so much.

Excerpt...
“Hello,” he said.
“Hi,” she said. Already she could feel her face flush. What had her mother said to him to make him come over here and talk to her?
“What’s your name?”
“I’m Elizabeth.”
“I’m Robert, it’s nice to meet you.”
“You too,” she said. He had nice, soft-looking, brown hair and a neat, clean-cut appearance; his eyes were friendly, his jaw was strong. Her friends would call him cute. She would too. She knew he was. Her mind accepted the fact that he was attractive, but her body was not responding to him. If he was just…for an instant she pictured him in a wheelchair, but she felt uneasy doing this, as though her thoughts might cause something awful to happen to this innocent man.
“Would you like to dance?” he asked.
Elizabeth was surprised. “Um, sure,” she said.
Robert held out his hand. Elizabeth put down her camera and took it. On the dance floor there were only two other pairs shuffling back and forth, clinging to their partners so close it seemed they were about to bolt for the bedroom. This made Elizabeth uncomfortable and she didn’t quite know how to hold Robert. He took the lead and brought her into a traditional dance hold. They began to shuffle too. The music was slow and boring.
Afraid to look directly into his eyes, Elizabeth mostly let her eyes drift over his shoulder. As they slowly turned, she saw that her parents were watching her closely.
They turned again and suddenly Elizabeth found herself looking at the man she had been secretly observing all evening. He had a beautiful wheelchair. It was small and sporty, with wheels that turned in slightly, and a red tube tucking his feet underneath the body of the chair. He was wearing sneakers with his suit. His pant legs were loose. One of his hands lay in his lap and the other held a glass of champagne.
Just before Robert and Elizabeth turned again, her eyes drifted up to his face and their gazes locked. Electricity seemed to shoot through all the veins of her body. She turned her head to stay with his eyes for as long as possible before her partner turned her around.
“Are you all right?” Robert asked.
“Hmm?”
“You don’t seem like you’re really here.”
“Sorry. I don’t care much for weddings.”
Robert laughed. “I thought all girls loved weddings.”
They turned and Elizabeth was looking at her parents again. She saw her mother frown at the same moment that she heard a voice on the other side of her.
“May I cut in?”
They both stopped moving and broke apart. Elizabeth turned and saw the man from the river and her stomach seized up. He was even more beautiful close up.
“Are you serious?” Robert said, but the man wasn’t looking at him. He held out his hands to Elizabeth.
She felt as though she was in a dream. She saw her hands stretch out to touch his and she saw her fingers trembling. The skin of his hands was thick and rough when she tightened her slender fingers around them. She didn’t notice Robert stumbling to the side of the dance floor and sitting down in the chair she had been occupying.
Suddenly, for the first time, the man seemed very short. Elizabeth was acutely aware of how tall she stood above him. From a distance he had seemed larger than life and now he only came up to her waist. She stepped slowly forward and back and the man holding her hands was rolled back and forth with her. She could feel the heat in her face and knew she was blushing. Hopefully he would think she was just flushed from the lights and the dancing.
How could she know this wasn’t a dream? Pinching herself did not seem like a practical test; instead she tried to open her eyes very wide. If she were asleep, perhaps her real eyes would pop awake if she could get her dream eyes open enough.
The man in front of her raised an eyebrow. It wasn’t a dream. She was so nervous that she could not find a place to rest her eyes. It was too intense to look into his hazel eyes, it was too rude to look at his legs, so she tried to focus on his nose.
“My name is Stewart,” he said.
She couldn’t seem to make her voice function. It was as though she had forgotten how. At last she whispered, “I’m Elizabeth.”

The Amazon link is: http://www.amazon.com/dp/B004XJCKSY


*****
Thank you Ruth for taking part in my Author Spotlight interview! I hope your writing continues to flourish and we hope to see more of you in the future.
*****
If you or an author/illustrator you know is interested in being interviewed, feel free to send me an email at jejoescienne@yahoo.com
Posted by Jenna Elizabeth Johnson at 5:00 AM