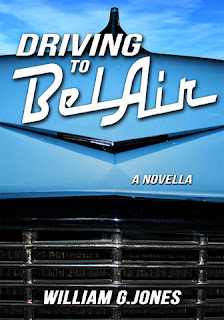 1.   Quickly, give us the title and genre of your book and a 30-word or less tagline:

Driving to BelAir / Mainstream Fiction / Is it the road trip from hell? Or one last chance to make things right again?

2.   How did you come up with the title of your book or series?

I'm a classic car fanatic. My dad has restored both a '56 and a '57 Chevrolet BelAir, and once I decided to use a '56 Chevy as the hero car, I wanted to tie the destination of the road trip in with the fact that the car is a BelAir.

3.   Who is your favorite character from your book and why?

That's tough. It's a toss-up between Arissa and Billy, and I think it's because deep down, they're both innocent in that they've somehow shielded themselves from the cynicism that comes with growing up. Even though Billy is a drug addict and causes so many problems throughout the story, he still comes across as sweet and somehow pure. I'm tempted to say Bandit is my favorite, though, just because I based him off my actual dog and I love that dog so much.

4.   How about your least favorite character?  What makes them less appealing to you?

The dad, without a doubt. He's such a volatile character who has to be present in every scene of the book, but he's really not really fleshed out in the book. That was a fine line to walk, because--in the sense of the story--he only exists in flashback, and at that, only filtered through Dale's point-of-view. Those early impressions have to stay with the reader until the end. I think the worst part was that the dad couldn't be a fleshed-out character interacting directly with the protagonist, so there was this constant sense of disconnect throughout the story.

5.   If you could change ONE thing about your novel, what would it be?  Why?

I'd change whatever is keeping people from clicking the "Buy-Now" button.

6.   Give us an interesting fun fact or a few about your book or series:

Driving to BelAir was originally written as a screenplay. The ending never really worked, though. I had a few people look at it and nobody could really put their finger on what needed to change. So, writing the novella was, in many ways, an attempt to work through the problems with the screenplay. In fact, most of the story goes through major changes from the mid-point on.

Also, Driving to BelAir is not autobigoraphical in any way. My dad is still working on old cars. Both the cars he restored are hardtops, not convertibles. But a lot of the quirks the car has are taken from events that really happen in those old cars--embellished, of course, but still very real.

7.   Do you have any unique talents or hobbies?

I'm a writer, a graphic designer, a video editor, a photographer, and I use to be known as the Mr. Goodwrench of computers at my old workplace, because I could strip down a tower and have it back together again within minutes, usually (but not always) fixing whatever was wrong to begin with.

8.   How can we contact you or find out more about your books?

9.   What can we expect from you in the future?

Who knows? I'm currently working on a rewrite of a thriller I started on in 1999. I also want to put out a short story collection and I've got another novella I started on I'd like to finish. We'll have to see, though. I'm not a speedy writer by any means, Driving to BelAir took me 6 months even with a finished screenplay to work from.

10.   Do you have any tips for readers or advice for other writers trying to get published?

My biggest piece of advice is to not shortcut this. I've seen so many people rush to self-publish and their work isn't anywhere close to what it could be or even should be. Great writers, too, who just can't seem to be bothered with rewriting or proper editing--they just throw a spell-checked first draft out there and beg people to buy it while they crank out part two. Editing and rewriting are just as essential as character and plot. There's nothing I hate more than a book that feels inconsistent from chapter to chapter or even paragraph to paragraph. As a writer, I just feel like if you can't take the time to get things right, I shouldn't waste my time reading it.

Thank you for this opportunity! I guess I should also say that Driving to BelAir is available at Amazon, Barnes & Noble, and Smashwords and, for the moment, only in eBook form.

12.   And now, before you go, how about a snippet from your book that is meant to intrigue and tantalize us:

Here's the beginning of the scene where Dale returns home for his father's funeral.

I parked and got out, went straight to the back of the rental and started unloading luggage. A cool breeze whipped the tops of the weeds in those overgrown fields. It sounded like some far off ocean. In the distance, a diesel tractor labored against the earth.

Monica opened the passenger door and the poodle came alive, jumping down and running past my feet. It hiked a leg and peed, all the while sniffing the air and jerking its head from side to side. Then Monica stepped out of the vehicle, those bug-eye sunglasses affixed once more to her face and aimed in my general direction.

“He was your father.”

I huffed a laugh and wagged my head.

Just then, the farmhouse’s screen door flew opened so hard it popped back against the wood siding like a small-caliber gunshot. My brother, Chad, came storming across the porch, sweat soaked through his plaid flannel shirt, the leather soles of his work boots slamming the wood porch steps in rapid fire. His hairline had receded in the years since I last saw him, the cut still short and dark, like dad’s.

“What are you doing here?” he screamed as he reached the dirt path in front of the house, spit flying from his mouth. “You don’t have any right to be here!”

Next thing I knew, he was right in my face, broad nostrils flared, squaring off like a prizefighter.


Thank you William for taking part in my Author Spotlight interview! I hope your writing continues to flourish and we hope to see more of you in the future.
*****
If you or an author/illustrator you know is interested in being interviewed, feel free to send me an email at jejoescienne@yahoo.com
Posted by Jenna Elizabeth Johnson at 5:00 AM