THE LEGEND OF OESCIENNE SERIES 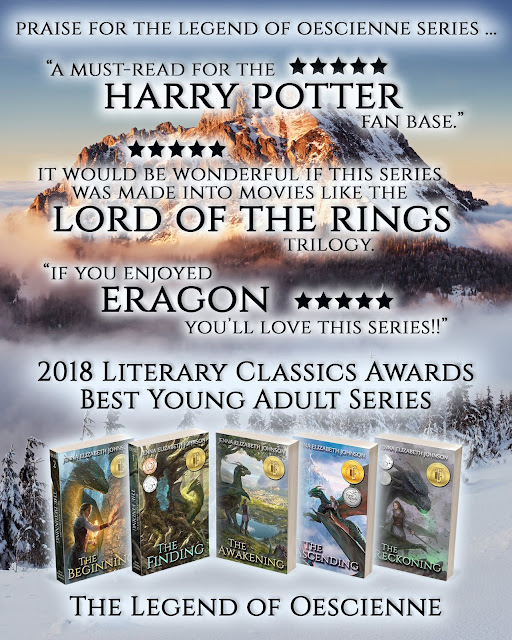 A human girl, the only one of her kind . . .
A Tanaan dragon, sworn to keep her safe . . .
And a destiny that will make them both the greatest legends of their time.

* * * * * * * *
Praise for the Legend of Oescienne books ...
Most excellent beginning!
Creative writing with well-developed characterization. It is a must read for the Harry Potter fan base.
- Amazon Customer
* * * * *
5 Stars not enough!
A remarkable dragon story for YA and teens, if you enjoy the Eragon book series by Christopher Paolini, you love this series!!
- Nilas
* * * * *
GREAT
This is a very good series for anyone who loves dragons and elves I couldn't stop reading till done and can't wait for the final book.
- Richard 62
* * * * *
Wonderful Story
Very good book that even young readers can enjoy. You find yourself becoming a part of this book while going on crazy adventures, racing at breakneck speed up a steep cliff, hiding from dangerous things in the black forest and discovering ancient stories long forgotten that could be the key to many questions. Great book!
- npatton55
* * * * *
I love this whole series!!
I really cannot wait for the next book, I think I am going to reread the three that are out :) I definitely recommend this series, the remind me of an epic like Lord of the Rings, but the story is as accessible as Eragon :) I just love it.
- blacksoul1385
* * * * * 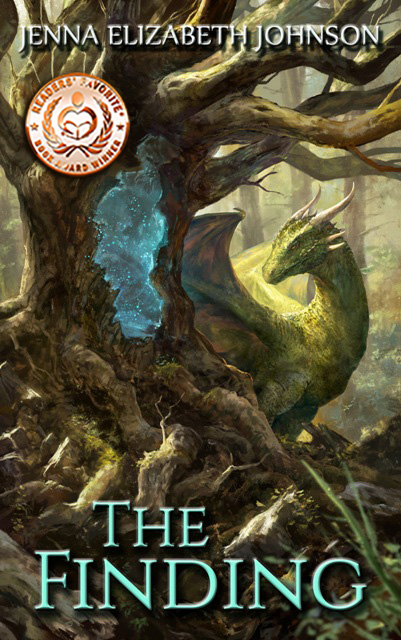 THE LEGEND OF OESCIENNE
- THE FINDING -
BOOK ONE
When the dragon Jaax receives word that a human infant has been found in the province of Oescienne, he doesn't dare believe it. Humans have been extinct for centuries, trapped by a terrible curse and left to live out their existence in the form of dragons. Despite his doubts, however, Jaax assumes responsibility for the baby girl only to discover that what he has been seeking for so many years has finally been found . . .

Jahrra knows all about the legends and sagas of Oescienne, but never in her wildest dreams would she believe that she played a part in one of them. She is far too busy dodging the bullies at school and seeking out new adventures with her friends to worry about what secrets her dragon mentor might be keeping from her, or that her every move is being watched by something living in the forest surrounding her home.

But the secrets run deep, and as Jahrra fights to earn her place in this extraordinary world, she will begin to unravel the truth of it all: that she isn't as safe as she thought she was, that danger lurks around every corner, and that her role in this unfurling tale is far more significant than she could possibly imagine. 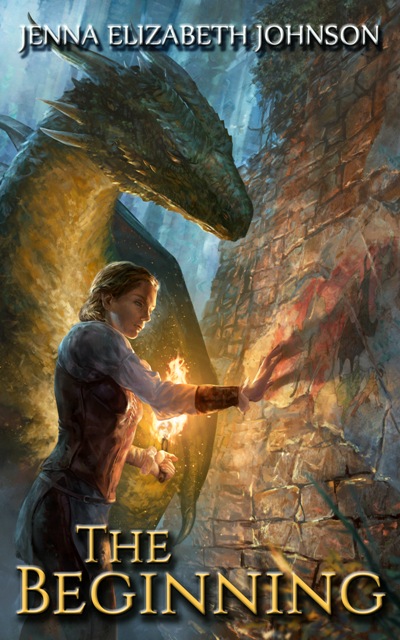 THE LEGEND OF OESCIENNE
- THE BEGINNING -
BOOK TWO
Twelve years have passed since Jahrra arrived in Oescienne and became the responsibility of the old Korli dragon Hroombra; yet much can happen in twelve years. So far, Jahrra's life has been filled with adventure, danger, friendship and even loss. Despite what she has learned in school and what she has learned from life, she has no idea that she is in fact human, a child of the race that has been absent from the world of Ethöes for five long centuries . . .

But the girl's identity must be kept secret, even from Jahrra herself, for if the Tyrant King of the East knew of her existence all would be lost. And as time goes by those responsible for the young human girl grow anxious and cautious, for there is evidence of an unknown danger in their midst; a danger they cannot see or hear, but one they can sense like a bad omen.

As Jahrra continues to grow and learn about the world around her, facing personal dangers, challenges and enemies of her own, she will become aware of the prophecy that she is meant to fulfill and what she must sacrifice in order to survive what lies before her. 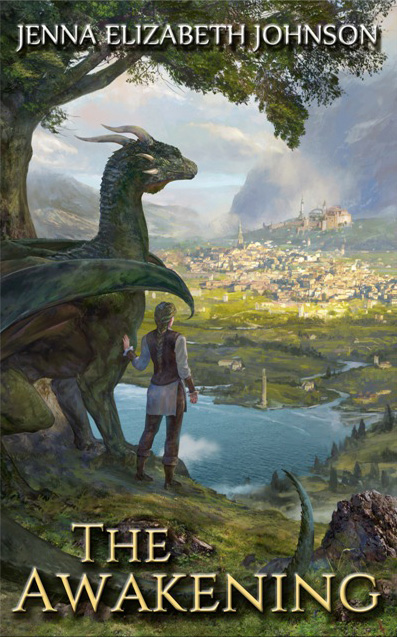 THE LEGEND OF OESCIENNE
- THE AWAKENING -
BOOK THREE
Growing up is never easy, but for Jahrra, seventeen years has brought its own unique share of hardships. She’s made both friends and enemies; has felt both joy and sorrow. Yet she has persevered through it all and has finally learned to know and accept who she is. Unfortunately, her trials and tribulations are only just beginning . . .

An inconceivable tragedy and the revelation of a secret kept from her since birth has turned her perfect world on its end. Jahrra isn’t the poor Nesnan she thought she was, but human, one promised by Ethöes in a prophecy from long ago. Now, without her guardian, she must accept the help of the one she mistrusts the most as they flee Oescienne before the Tyrant’s minions have a chance to close in.

With her enemies at her heels and the terrifying truth looming before her, Jahrra will seek shelter with the dragon Raejaaxorix in the faraway city of Lidien, a place of hope and enlightenment. But when the City of Light proves to entertain its own dangers, Jahrra and Jaax find their safety threatened once again. But this time the threat may be coming from those they trust the most . . . 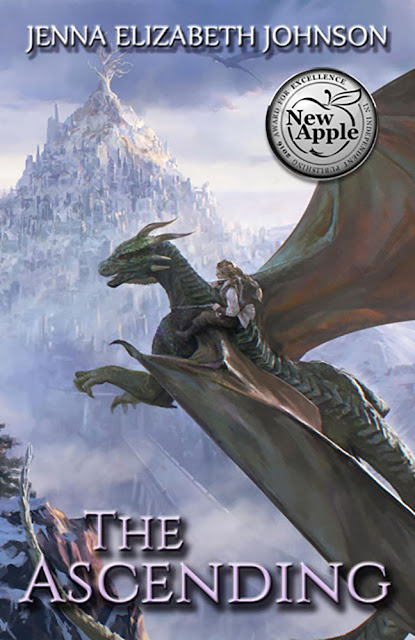 THE LEGEND OF OESCIENNE
- THE ASCENDING -
BOOK FOUR
A year has passed since the Tanaan dragon Jaax and his human ward, Jahrra, came to live within the protected boundaries of Lidien, the great City of Light. But even the safest places in Ethöes can harbor enemies, and one cannot hide from one’s fate forever.

At the onset of yet another departure, Jahrra realizes there is more to this next step in her journey than she previously thought. With Lidien fading in the distance, she understands she is finally leaving behind not just her friends, but also her childhood and a life once filled with dreams and illusions of safety and love. The road ahead is perilous, and Jahrra knows she will face many trials before coming to stand before her destiny. With each passing day, the threat of the Crimson King grows stronger, and Jaax and their allies will need the help of the legendary Creecemind dragons if they wish to overthrow their common enemy.

Before they can present their case before the king of the Creecemind, however, Jahrra and her Tanaan guardian must make a perilous journey north through the mountains, where danger and uncertainty lurks in every crevasse and behind the face of everyone they meet. Their trust in others must be bartered carefully, for the Tyrant’s influence stretches far and wide. And even if they do reach Nimbronia, the frozen City in the Clouds, their troubles may not be over. If the king of the ice dragons cannot be convinced to join their cause, then their fate, and the fate of Ethöes, may very well be sealed in sorrow and defeat.

SHORT STORIES FROM THE WORLD OF ETHOES ... 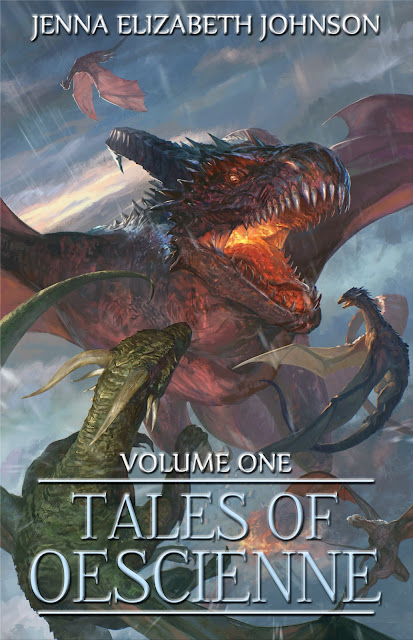 TALES OF OESCIENNE
- VOLUME ONE -

CONQUER THE CASTLE
Jahrra and her friends are about to embark upon a very important mission: to steal the flag of their nemesis, Eydeth, in a city-wide game of Conquer the Castle.  Will they be able to outwit their other classmates in order to win the grand prize, or will the twins once again make Jahrra the laughing stock of the whole school?

THE SPIRIT STONE RING
The Mystic Archedenaeh has found reason to leave the comfort of her forest home in the province of Oescienne.  Before she can move on, however, she must first verify a rumor she has heard, but all she discovers is a treasured ring left behind as a bitter reminder of the truth.
FIRE AND ICE


The Tanaan dragon Jaax and his colleagues are called upon to save a small town from the wrath of one of the Crimson King's evil dragons.  In the process, Jaax receives a minor injury, a nagging reminder of his failure that soon becomes the symbol of another's triumph.