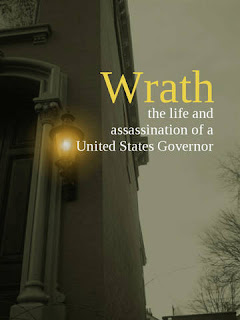 Wrath-the life and assassination of a United States Governor tells the story of the only governor to be killed in office.

I stole the title from a straight biography called William Goebel: The Politics of Wrath. I chose it because it was the defining characteristic of Governor Goebel - his anger.


3.  Who is your favorite character from your book and why?


My favorite character is the entirely fictional character simply called The Mountain Man. He is the antithesis of William Goebel and is the hero of my novel. He's the one that pulls the trigger that stops Goebel.


4.  How about your least favorite character?  What makes them less appealing to you?

5.  If you could change ONE thing about your novel, what would it be?  Why?

I quit looking at the book because every time I opened it up I saw something that could be improved. But there's a point where perfection becomes the enemy of the good. Also, one change upsets the entire balance. I'm not avoiding your question but I'm happy with the book. Early on I found somethings that I regretted and some errors that were pointed out to me. That's the beauty of independence. I went in and made the changes and uploaded them!


6.  Give us an interesting fun fact or a few about your book or series:

One things I try to communicate is that politics are not more divisive now than in the past. For example, in 1899, William Goebel was elected governor of Kentucky and assassinated. However, in most biographies of Goebel gloss over the fact that in 1895 he shot a fellow politician of his own party...and killed him...and Goebel was walking with the Attorney General of Kentucky at the time. Imagine a modern day governor having killed a man in front of his state's chief law enforcement officer and being elected to the state's highest position four short years later.


7.  Do you have any unique talents or hobbies?

I'm a beekeeper. Nothing focuses the mind and drives out all outside worries that opening up a hive of 50,000 bees than can cause you discomfort if you don't take care with them.

And here's the Amazon link
http://www.amazon.com/Wrath-assassination-United-Governor-ebook/dp/B004LLIWOK/ref=ntt_at_ep_dpt_5

I'm also doing a series of novelettes called The Prescott Carmichael Jaunts. It's light-hearted humor stuff that I think people will enjoy.


10.  Do you have any tips for readers or advice for other writers trying to get published?

Don't try to get published. Write a book or story. Polish it. Upload it. Don't look for approval from an agent or a publisher. I'm convinced that there's no economic justification to using them. There may be other justifications such as wanting your ego stroked by being published traditionally but that's up to the individual author.


Thanks for asking the questions!

Goebel and Hendricks crossed the street. Helm followed. Sanford stood on the step of his bank. Sanford and Hendricks shook hands. They did not speak. Sanford kept his eye on Goebel. He’s not gonna make this easy for Goebel, Hendricks thought. If Sanford wanted to cuss him in the street then Goebel has it coming. Helm came around and stood beside Sanford. Sanford gave his left hand to Goebel. That’s strange, Hendricks thought. Goebel took Sanford’s hand with his left hand. The meaning dawned on Hendricks a moment before the stinging burned his cheek. He heard the roar then the ringing in his ears and he smelt sulfur. Hendricks opened his eyes and saw black soot on Helms’ face. He felt Goebel turning away. He looked to Sanford. He stood limp. A black hole on his forehead suddenly trickled blood. He crumbled to the ground.


Hendricks reached out to grab him. Sanford’s head smacked the brick bank step. Hendricks knelt down and cradled his head. Helms held a handkerchief to his own face and put his free hand over the hole in Sanford’s head. Hendricks put a hand to Sanford’s face.

It felt…slack...dead.
“A doctor? Someone get a doctor,” Helm screamed as a crowd started to peak out from behind their hiding places. Hendricks, thinking of Goebel, looked around. Goebel was walking slowly down the street against the stream of people running toward the three men. He saw Goebel come to an intersection, round a corner and slip out of sight.

Goebel sat down in Chief of Police Atkinson’s office.

“What can I do for you, Bill,” the chief asked.


“I just shot John Sanford in front of his bank,” said Goebel. “I’m sure he’s dead. He had a gun too. Jack Hendricks and Frank Helm were with me.”


Atkinson whistled through his teeth. “Have a seat, Bill.”


“And here I thought you wanted to be governor?” said the chief.

Goebel snapped out of his thoughts. “Bitte?” Goebel corrected himself.

“A big chunk of General Lee’s old Army lives and votes down state, Bill. And you just shot a son of the Confederacy. And you…you as Yankee as they come. The son of a kraut Union soldier.”


Thank you Howard for taking part in my Author Spotlight interview! I hope your writing continues to flourish and we hope to see more of you in the future.
*****
If you or an author/illustrator you know is interested in being interviewed, feel free to send me an email at jejoescienne@yahoo.com
Posted by Jenna Elizabeth Johnson at 5:00 AM