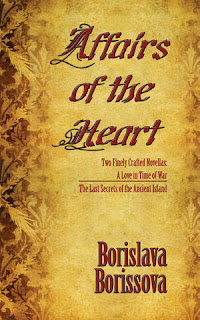 “Affairs of The Heart” - Two love stories, two affairs of the heart in one book. In them lives all passion I have for history and adventures, time-traveling and thrillers, mysteries and great love.
2.  How did you come up with the title of your book or series?

I love stories based on real life so I write single books, not series. I am always in a hunting to hear, to learn something interesting that could shake me and hold my imagination for long. Having a real story for the plot I follow the heroes in their experience and something my imagination very vividly show pictures of it as if a film passes in my mind.
3.  Who is your favorite character from your book and why?

I love them, if I could meet them I would thank them for the company and for the stories they told. They know, we were born alone, we die alone but life is our chance to live in love so we should not waste our days in this regard. You may hear them speaking:
“Love or necessity for love could inspire us better to change something in ourselves, to change for good?”
“The best thing is to go out and taste life as I have suggested once. There is always a new beginning, its end is always unknown.”

“Love! It is the most important in life. If there is not love in Heaven I’d much rather stay on Earth.”
4.  How about your least favorite character?  What makes them less appealing to you?

There is no one. There is just difference between my heroes and me. Sometimes their problems, important questions are the same as my own. However, answers are different.  What is love? Escape from loneliness? Or love is a deep friendship and having it for something else is just our illusion? What would love inspire? A new sense of life? Happiness? Or love would kill our innocence? Does being in love mean we discover mutuality but losing part of your identity? Questions, puzzles and some answers in two love-stories, two affairs of the hearts.
5.  If you could change ONE thing about your novel, what would it be?  Why?

Oh, I should change something that happened in real life years ago. I am sure my heroes would love if I could help them in such a way but it is impossible, of course. Actually, I would love to have more romance in the environment or in their behavior, in their attitude. I think there is shortage of romantics in our time and world. What I would not change is their response to the dilemma: “To be in love or to be loved?" My main characters are active, enthusiastic and like to be in love.
6.  Give us an interesting fun fact or a few about your book or series:

Once I saw a Russian play at the theatre. Its playwright claimed there is a tunnel, a gap in the time and it is there that the writers meet their characters. That evening I thought I would like to face my characters in real life if it was possible. I like them! They have been my very friendly company during the long and sometimes boring hours of writing.
7.  Do you have any unique talents or hobbies?

Sometimes I dream to have a very unique talent so at least once in my life to experience being a wizard, to have own magical wings to fly over lakes and mountains, big falls, steppes and canyons, to inspire someone for something beautiful, to learn the stars language, but not in astrological sense that means what the stars “say” to people. I mean the celestial language on which stars and planets sing, speak each other according astronomers claim. I also would use such power to win many bright hearts to love me, to live long enough and be able to leave the world by my wish and leaving something worthy, a story of a great love behind me.
So many dreams, enough for a couple of human lives :)))
8.  How can we contact you or find out more about your books?

My next story “Love and Other Dreams”. I have much to say about love. The first three chapters of it are published on my web-site.
10.  Do you have any tips for readers or advice for other writers trying to get published?

I am sure people, who are interested in being writers know much about the whole process. But I have something to say: don’t believe in rejection letters! You may write a nice story and if someone, if many ones – agents, publishers etc. - reject it, don’t give up your thirst for writing. When one loves to do something - to climb mountains up, to swim, to play soccer or to write - he or she just does it because of the pleasure and despite the result. Each swimmer does not go to the pool or sea, or ocean because she/he would become an Olympic Champion. I have never lived with the thought “I can do this”. In my case it is always the sense “I need to write, I want to write.” For me the most challenging is "to write or not to write"; "to start a new book or never start a new book"... such moments always can happen because nothing ends with the end of the creation of a story. When the last sentence is written, the pages are wrapped with beautiful covers in warm colors and you take a deep breath that everything is behind you… actually at that moment the next difficulties just start. The author must put tremendous efforts to overcome all obstacles on the road to the readers. Writing isn’t an easy process but finding a publisher, marketing and promotion of the book to touch readers is no simpler at all. Of course, there is also the thought about success in everyone.
11.  Is there anything else you’d like to say?

Million thanks for being with me on my lifelong adventure through the ages, through countless earthly and celestial places, to meet my characters in their settings, to be part of their life... Welcome on the seat next to me and feel the stories!
12.  And now, before you go, how about a snippet from your book that is meant to intrigue and tantalize us:

Two snippets from “Affairs of The Heart”:
From "The Last Secrets of The Ancient Island”:
“I wanted to see the face, to look into the eyes of the dangerous driver who scared us with his crazy driving, caused a series of collisions and accidents on our streets and placing the life of each of us in danger and uncertainty. I still remember the squeal of the high-speed tires and the sense of an evil menace and I wanted to rage at him, to strike him. I expected…” Michael sighed sadly and, forgetting everything and everyone around him, he lapsed into the memory of that time.
“In the hospital, I ran up the stairs and I looked in the room to peer over medic’s shoulder. There were a multitude of tubes and wires. The intravenous system and respirator were attached to the body in the bed, to keep the driver alive. I saw the ashen skin, dark rings around the eyes, fragile hands—they were already powerless to hold the wheel. The body was worn, similar to a shadow. It was a young woman who wanted to die, who searched for death on the road as fast as the car would go. And to take another life with hers so she wouldn’t be alone when she drew her last breath.”
From "A Love In Time of War":
After a while, the older white-haired man repeated in amazement, “Let’s clear this up. You fought to the death in the Balkan War against her father, her brother and her country. And she served as a nurse to Bulgarian soldiers, among blood, wounded, dead, and the smell of formaldehyde on the opposite side of the borderline. Does it mean you are coming to ask for the hand of your enemy’s daughter? The Bulgarian general, who personally led his army from the front line against the Ottoman divisions?”
“Yes. First there was the war… the love followed later. Peace was somewhere in between.”
“Yesterday, you could have killed her on the other side of the front, today you are in love and what about tomorrow?”
“She feels the same way. All our efforts to remain enemies appeared to be in vain. The border line between our ability to hate or to love appears a thin one.”
His fellow traveler shook his head distrustfully. “Your story sounds crazy. Most probably, her father will not allow her to marry you. Hmm... Kidnap her instead. Escape together as others have done many times on the Balkans.”
“Who would easily marry a Muslim man and a Christian woman in secret? If not, what would she be in my life without a legal marriage? A mistress? The woman who was born to be my wife? I cannot make a political scandal between our countries. The general is respectful and popular.”


* * *
Thank you Borislava for taking part in my Author Spotlight interview! I hope your writing continues to flourish and we hope to see more of you in the future.
*****
If you or an author/illustrator you know is interested in being interviewed, feel free to send me an email at jejoescienne@yahoo.com