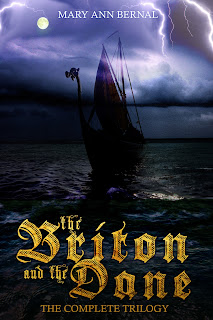 “The Briton and the Dane” trilogy
Historical Fiction

2. Who is your intended audience and why should they read your book?

Historical Fiction fans interested in the Dark Ages during the Viking expansion when Alfred the Great reigned. The story incorporates remnants of Roman Britain, which sets the trilogy apart from the usual Dark Ages references.

3. How did you come up with the title of your book or series?

Initially there were two working titles:  Erik, the Danish Viking and Erik & Gwyneth, which seemed lame, especially since the story quickly evolved into a major saga with a “cast of thousands.”  Since God is my muse, He provides suggestions in the middle of the night, and that is how “The Briton and the Dane” title came into being.  Of course I wrote it down immediately lest it disappeared by morning, and because I keep a writing pad in the kitchen, I was able to read what I had written when I was wide awake.

4. Who is your favorite character from your book and why?

Erik has been in my head for over twenty years, demanding his story, which was finally published in 2010, but his character is more Hollywoodesque, a larger than life character who is excitingly adventurous, a worldly warrior that women wished to tame.  While I love Erik dearly, I must confess David is my favorite character.  I will not be specific with examples (no spoilers) but suffice it to say his priorities are where they should be with family values.  In today’s day and age, he would be the dependable person who could be counted on no matter the issue.  Some might say that I set the bar too high with David’s character, but then would he not be a person to emulate?   I have heard from many fans that they wished they had a David in their life, so I did “hit the nail on the head” so to speak with my portrayal of this character.

5. How about your least favorite character?  What makes them less appealing to you?

This is a difficult question because I really do not have a least favorite.  Yes there are villains you love to hate, but once you discover the reason they behave like they do, you tend to sympathize with their plight.  However, if I must choose, I would pick King Guthrum.  Again I will not be specific (no spoilers) but suffice it to say his priorities differ from those of David.   In modern terminology, he chooses career over family, and his decision or lack thereof, is the catalyst behind the outcome of the second book.

6. If you could change ONE thing about your novel, what would it be?  Why?

There is one change that I was fortunate to make with the publication of the special edition of the first novel. I initially used archaic verbiage because I wanted to transport the reader back in time.  However, it proved very difficult for the modern reader, even though “test readers” stated it was easy to read once you got into the lingo.  The second and third novels reflect this change.

7. Give us an interesting fun fact or a few about your book or series:

What I found exciting was to finally visit the places I had written about.  I spent two weeks in East Anglia where I came upon West Stow, a well preserved Anglo-Saxon village where “Born of Hope” was filmed.  I also discovered, quite by chance, the Thetford Priory ruins, which was featured on Ghostbusters International.  The paranormal investigators inspected the haunted priory in 1996.  How cool is that!  Unfortunately, I did not meet up with any ghosts when I visited the ruins.

8. What other books are similar to your own?  What makes them alike?

“Viking Warrior” by Judson Roberts focuses on the Danish Viking invasion of Frankia in 845.  His epic adventure also includes treachery and vengeance, which makes for a great story.

9. Do you have any unique talents or hobbies?

I have taken Medieval Dance classes and did a demonstration with my fellow dancers from the Barony of the Lonely Tower at a Ren Faire held at the James Arthur Vineyards in Raymond, NE. The Barony is located in the Kingdom of Calontir, a division of the Society for Creative Anachronism.

10. How can we contact you or find out more about your books?
Webpage:

Novels published in association with The Literary Underground

You can view the book trailer here: http://www.youtube.com/watch?v=fH1qSGHOSMA

And purchase the books here:


11. What can we expect from you in the future?

“The Briton and the Dane:  Concordia” will be available early 2013.

12. What can readers who enjoy your book do to help make it successful?

The following references pertain to the book page listed on Amazon.com.  Reviews and ratings are always appreciated.  For readers not comfortable with writing a review, they could check “like” which appears right after the ratings/review  line, beneath the author/illustrator names.  Checking the boxes next to the tags under the Tags Customers Associate with this product is very helpful, and if you have a tag that is not listed, by all means add it.  Customer discussions is another way to generate interest, if not online then talking to friends - passion about any story generates interest.  Word of mouth still works for getting a story “out there.”

13. Do you have any tips for readers or advice for other writers trying to get published?

Keep writing and never give up.  If going the conventional route is not working for you, then consider self-publishing - its not as hard as it sounds.  Every successful author has had his/her share of rejections and negative reviews, so you are in good company.  If you have a story to share, tell it.  Persevere and never, ever quit.

It has been a pleasure to be a guest on your blog.  It is always fun to humanize an author.  Thank you for giving me this opportunity, and for a fun time.

15. And now, before you go, how about a snippet from your book that is meant to intrigue and tantalize us:

The Briton and the Dane:  Birthright

Inga and the boys waved at the guards who stood atop the gatehouse when they left the compound. They would arrive at the market well before the midday heat and welcomed the gentle breeze as they walked the dusty road.

The town was bustling by the time they reached the outskirts. The boys held Inga’s hand while she followed the winding street that led to Dalla’s dwelling. James and John stared at the various fruits and vegetables that were carefully placed upon the open carts. They pointed impatiently to their favorite foods and pleaded with Inga to permit them to visit the stalls. Flies buzzed around the hanging carcasses of newly slaughtered pigs, which were ultimately quartered and sold.

Dalla waved excitedly when the brothers broke free from Inga’s grasp and ran to the top of the hill. She embraced the lively children and laughed when they struggled to set themselves free. James and John shrieked when they saw Loki standing in the doorway with his hands behind his back.

“Have you the soldiers?” Both boys asked. “Let us see!”

Loki held his arms above their heads as the boys sought to grasp the ivory figures that were just out of their reach.

“As you wish dear sister,” he replied just as the boys grabbed their precious gift.

Dalla embraced Inga and kissed her cheek before they entered the house. Loki poured ale and wine while Dalla placed a bowl of fruit upon the table.

Inga was delighted when Loki surprised her with a small token and quickly opened the silk pouch that contained an exquisitely-carved bone hair pin.

“This is lovely,” she whispered. “There are no words.”

“It pleases you then?” Loki asked as he held her hand and looked into her eyes.

“Aye,” she blushed as she averted his gaze.

Dalla led Inga to the table and offered her a goblet. She sipped the wine and laughed at the boys’ excitement when Loki surprised them with a superb wooden replica of an ancient Roman chariot.

“The wheels move!” John shouted excitedly when he rolled the toy across the bench.

“You are most generous,” Inga said as she attempted to stand.

Loki came to her rescue after she leaned unsteadily against the table.

“I fear that I am not well,” Inga whispered just before she lost consciousness and fell into his arms.

Loki carried her outside and placed her into the back of a cart. The boys were busy playing and paid no heed to their elders.

“James and John, are you parched?” Dalla smiled when she handed them half-filled goblets.

The boys eagerly drank the sweet wine, emptied their cups in one swallow, and were soon soundly sleeping beside their beloved Inga.
Dalla and Loki rode unhurriedly through the busy streets when they left the market town and headed east.

Helga crossed the inner bailey and headed towards her family’s private quarters.  The sun would soon set and the main gate closed for the night. She was not able to find Inga and the boys and silently prayed that they were already in their chambers. She shouted their names while she frantically searched the empty dwelling and hurriedly ran to the gatehouse just as the guards were about to shut the gate.

“Inga and the children are not back,” Helga yelled while she climbed the stairs.  “Do you see them on the main road?”

Helga listened halfheartedly while the soldiers reminded her that the scouting party had already returned and would not set out again until first light. She pushed the men aside as she leaned over the wall and suppressed the urge to scream when she saw the deserted countryside.

Helga held back the tears while she ran to find David who would still be in the great hall conferring with his advisors. She hurried through the open door and was out of breath by the time she approached her husband.

“The boys are not in their chambers!” Helga breathlessly exclaimed.
David quickly rushed to his wife’s side and held her in his arms.

“You are trembling,” David whispered, “why are you troubled?”

“Inga has not returned with the boys,” Helga sobbed.

David shouted for his men to bring the horses and requested that Brother Aidan be found to comfort his wife.

It did not take long for David and his men to reach the market town; the soldiers searched the individual dwellings while David spoke with the local merchants. As dusk became night, the men continued their search but were unable to discover Inga and the children’s whereabouts.

Brother Aidan and Helga watched from the gatehouse as David and his men galloped towards the main gate.

“David!” Helga yelled as she frantically hurried to meet her husband. “I am fearful.”

“There is mischief,” David told her.

“What do you mean?” Helga asked between sobs.


“Dalla and Loki are not known,” David whispered. “Our children have been taken.”


Thank you Mary Ann for taking part in my Author Spotlight interview! I hope your writing continues to flourish and we hope to see more of you in the future.
*****
If you or an author/illustrator you know is interested in being interviewed, feel free to send me an email at jejoescienne@yahoo.com
Posted by Jenna Elizabeth Johnson at 5:00 AM