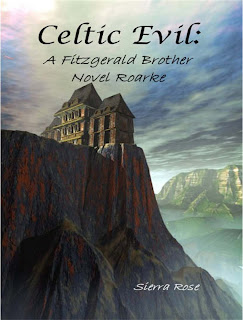 1.  Quickly, give us the title and genre of your book and a 30-word or less tagline:
Celtic Evil: A Fitzgerald Brothers Novel: Roarke. It’s a paranormal romance. Magic, romance, five Irish brothers & the return of an evil Warlock begin the tale of the Fitzgerald brothers as Roarke returns home to face his past & save his future.
2.  How did you come up with the title of your book or series?
Not easily. This is probably the fifth title it had until I decided to play on the Celtic theme and it just fell into place after that. I think this title sounds better than ‘Danger on the Emerald Isle’ which was the original one.
3.  Who is your favorite character from your book and why?
That’s hard since each of the boys has his lovable traits and I know it should be Roarke since he’s the main one in this book but my favorite is Ryan. He started out in planning to be a totally different character than what he evolved into so. He’s just got something that makes you love him no matter if he is often brusque and too cocky for his own good.
4.  How about your least favorite character?  What makes them less appealing to you?
Can I have one of those? It may come as a surprise to those who have read my books in this series but if I have to pick a least favorite then it might be Mac. I think he’s a bit more serious than the others which also makes him a bit more difficult to write & he’s also the one brother whose past isn’t as clearly defined as his brothers.
5.  If you could change ONE thing about your novel, what would it be?  Why?
Ian’s age. When I first planned and wrote the first two books in the series I didn’t count on how difficult it would be to manage an eighteen year old in a romance book so if I could redo I’d change that.
6.  Give us an interesting fun fact or a few about your book or series:
When I was first plotting these characters, the series was supposed to be set in the United States and be more of a cowboy themed series.
7.  Do you have any unique talents or hobbies?
Not really. I collect comics and write fan fiction for the TV series Supernatural when not working on my regular stories.
8.  How can we contact you or find out more about your books?
I have a website(that really needs updated) at: http://sierra-rose-books.webs.com/
I also have a Facebook page at: https://www.facebook.com/pages/Sierra-Rose/77103441425
The series also has a FB page at https://www.facebook.com/pages/Celtic-Evil-A-Fitzgerald-Brother-Series/212147328035?v=wall
9.  What can we expect from you in the future?
Ryan’s book is nearly finished and so will be out soon. It was delayed from this year due to an illness my Mom suffered which kept me from giving the boys the attention they deserved.  Then Kerry and Mac will also have theirs out but I can’t say when. There’s also another action book in my S.E.A.L. Team Omega series in the works.
10.  Do you have any tips for readers or advice for other writers trying to get published?
For readers, always give Indie authors a chance. You never know when you’ll find your next favorite author. For writers, just keep trying and never let anyone tell you that you can’t.
11.  Is there anything else you’d like to say?
Thanks for this opportunity and thanks to all the readers who have read the first two books in the Celtic Evil series for their support and patience while waiting for everyone’s favorite Irish gambler to get his book out.
12.  And now, before you go, how about a snippet from your book that is meant to intrigue and tantalize us:
Seeing the jumping beast from the corner of his eye, Roarke Fitzgerald waited until the last possible second to twist out of the way, but still felt the hot snarl pass him.
“Jessica!” he had used the biggest portion of his remaining power to deflect the second beast who had been about to attack his friend.
The wind had deflected it but she had still fallen under a brief contact and had yet to move.
Chancing a quick look, he could tell she was breathing but bleeding from where her head had struck the path.
“Shit!” Roarke swore to himself, figuring he could handle one of these things if he kept his head and didn’t panic but knew he didn’t have the power to handle two and protect himself along with Jessica.
Making the only choice that he could, Roarke quickly diverted his most strength to shield his friend from any attacks since he knew that even one of the things could tear her apart within seconds.
“It’s me you want, you bloody demons!” he snapped, speaking directly to the large beasts. “You wanted me fifteen years ago. Well here I am, so take me!”
Throwing a hand out, blue energy shot from his fingers to strike both creatures but at his current levels, it was more of a taunt to get them to face him than to actually hurt them.
The first beast, the large of the two, seemed to snarl as it began to circle but the smaller one was still eyeing Jessica Hadley’s prone form.
* * *
Thank you Sierra for taking part in my Author Spotlight interview!  I hope your writing continues to flourish and we hope to see more of you in the future.
*****
If you or an author/illustrator you know is interested in being interviewed, feel free to send me an email at jejoescienne@yahoo.com
Posted by Jenna Elizabeth Johnson at 5:00 AM