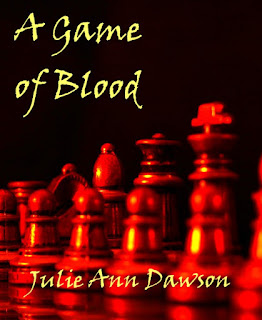 1.   Quickly, give us the title and genre of your book and a 30-word or less tagline:
A Game of Blood
Paranormal Thriller
What would you do if a three-hundred year old vampire decided you would make the perfect Van Helsing to his Dracula?
2.   How did you come up with the title of your book or series?
The “game” in question refers to both the politics of the vampire court and the game of cat-and-mouse between Mitch and Darius.  Darius in particular often refers to things as a chess match, with various other characters in the book serving as different chess pieces.
3.   Who is your favorite character from your book and why?
I equally love both Mitch and Darius, as they really are sort of flip sides of the same coin.  In some ways they are polar opposites, and yet those differences only make their similarities stand out that much more.  Mitch is rough around the edges and resorts to some rather colorful language when frustrated, but has a heart of gold.  Darius is smooth, charming, and well-spoken, and also a heartless bastard.
4.   How about your least favorite character?  What makes them less appealing to you?
A character would not be in the book if it wasn’t interesting in some way.  I can’t say I have a least favorite character or one that is unappealing.  There are a few that need a good shaking to shake some sense into them.  There are a few that definitely deserve exactly what they get in the book.  And there are a few that I feel bad about their fates but I had to do what was best for the story.  But insofar as unappealing?  All those characters were edited out in the final draft!
5.   If you could change ONE thing about your novel, what would it be?  Why?
Well, since I am also the publisher, I can change anything about the novel whenever I want!  But no, there isn’t anything I would change. The book has been through all of the edits it is going to get.  Time to work on the sequel.
6.   Give us an interesting fun fact or a few about your book or series.
The novel actually started out as a short story, and that short story appears in the novel as the prologue.  The original short story was a spoof of sorts of the whole paranormal romance thing, with a young woman meeting a handsome, wealthy, and seemingly sensitive vampire in a club.  When I finished the story, however, I had this amazing character of Darius Hawthorne who was demanding a lot more attention.
7.   Do you have any unique talents or hobbies?
I wish I could say I was a great artist, but as those who follow my blog know my stick figures are pretty horrible.  Can’t say I have any unique talents beyond writing.  As far as hobbies, I’m pretty immersed in the rpg community.  The old style “Dungeons & Dragons” pen-and-paper variety RPGs.  I also design and publish RPG materials.
8.   How can we contact you or find out more about your books?