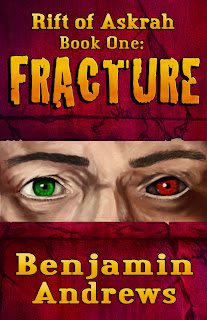 1. Quickly, give us the title and genre of your book and a 30-word or less tagline:
Rift of Askrah Book 1: Fracture
A story of loss, recovery and change spanning across an entire world. An age of peace ends, and Nihlen Draven must understand his powers to win back his homeland.

2. How did you come up with the title of your book or series?
The title was born from the main points of the overall story. The “Rift” is the division between two nations, Draven and Rinh, which occupy the island known as Askrah. In ages past within this world, Askrah was a powerful nation that has ruled over every continent. The island of Askrah was also the location of the original nation known as Askrah. After a split though, it became two nations known as Draven and Rinh. A large portion of the story is about the past of this once powerful nation entering the world once again. There is a rift between these two nations, and the world requires a king of Askrah once more.

3. Who is your favorite character from your book and why?
It's an equal toss up between the main hero Nihlen, and another main character named Marina. Nihlen is the upstanding hero, who isn't afraid to stand up for what he believes in. Many of the most passionate scenes revolve around him. For Marina, it's her personality. Writing stuff with her is fun, because she's so strong about some things, yet just as weak for others.

4. How about your least favorite character? What makes them less appealing to you?
Least favorite is probably Cal. He's surly, and prone to anger and outbursts. This is highly contradictory for my personality in real life, and that seems to translate into my feelings about this character.

5. If you could change ONE thing about your novel, what would it be? Why?
I think it would be travel time. I set the different continents pretty far apart, and have had to do some creative changes in book 2 of this series to not be hindered by it. Thankfully with imagination any problem can be overcome, but it has made certain things difficult.

6. Give us an interesting fun fact or a few about your book or series:


The Rift of Askrah series was the second book idea I ever came up with. I spent a couple years when I was a young teen writing out the outline to the first series I ever created. When I finished though, I had the idea about the Rift of Askrah series. I developed it through high school and college, and decided it would be my pilot project. I'm keeping that first series under wraps until I decide it's time to write it.
Also, I've been writing another series along with the RoA series. It's called Into the Devil's Eden. This series is a hybrid between two stories I had brief ideas for after the completion of book 1 in the RoA series. It leans more into the science fiction realm. You can learn more about the creation of this new series on my blog.
7. Do you have any unique talents or hobbies?
Since I seriously began pursuing writing, I haven't had a lot of free time for other hobbies. When I can get up the mountain I love snowboarding. I cook, do some artwork, and enjoy video games. I also write reviews for books and video games on my blog.

8. How can we contact you or find out more about your books?
You can check me out foremost on my blog: magicjarpublishing.blogspot.com
I'm also on Twitter, Facebook, and other websites. I'll save you some reading and let you know you can find them all from my blog.
Rift of Askrah Book 1: Fracture is available at:
Amazon: http://www.amazon.com/Rift-Askrah-Book-Fracture-ebook/dp/B0059XRUJW/ref=sr_1_1?s=digital-text&ie=UTF8&qid=1312617230&sr=1-1#_

9. What can we expect from you in the future?
You can expect quite a lot! With two series currently in development, and other ideas I have written down, I have no shortage of ideas for future books.

Whether you're taking the traditional route, or are going independent, you just have to keep at it. Give each story everything you have, and keep writing even if sales aren't there. It takes a combination of time, luck, and skill to get anywhere as a writer. A vast majority of time, it doesn't happen over night.
11. Is there anything else you’d like to say?
I'd like to thank Jenna for the interview! Also, thanks to those who read all the way to the end. I hope you enjoy this book, and all those that come after it!

12. And now, before you go, how about a snippet from your book that is meant to intrigue and tantalize us:
This is a scene from an early chapter, just after Nihlen escapes confinement. His ability, the Eye of Kings has just manifested, and he is enthralled by its power.
“Demon!” The man shouted, taking multiple steps back. He hadn’t made a sound during the entire conversation between Nihlen and Calden. Now that Nihlen’s attention was back on him though, he was quite alive again. He brandished his sword wildly, and it shook as he held it. “Stay back monster! I will kill you if you come any closer to me!”
Nihlen put his hand up to his eye. “I don’t know what this is. Maybe I am a monster.” He said, as a smile slowly came upon his face. “And right now, I don’t care. You shout threats at me in your desperation, that clearly you can’t accomplish. This pursuit, and the fear, end here.”
Nihlen quickly closed the distance between himself and the man. The man screamed in fright, trying to attack Nihlen with his sword. Nihlen easily caught the man’s arm though, and in one fluid movement, he smashed his other hand into the man’s forearm, shattering it.
“Ugh!” the man cried out, dropping his sword, and falling to his knees. He cradled his arm, crying silently to himself.
Nihlen reached down, and picked the man up by the throat. He rose him up slowly, until he was holding him above his head. The man pulled futilely at Nihlen's hand with his remaining good one. He chocked and sputtered as he gasped for breath, but to no avail. Nihlen reached towards the man’s belt, and drew his knife.
“Nihlen!” a voice called from behind him. “Don’t do it! Please don’t do it!”
It was Marina. Nihlen didn’t turn around, he continued holding the man, staring up at him, knife in hand.
“These people came after us. It is only fitting they should meet the fate they were willing to visit upon us. That is the way of the world.” Nihlen said quietly, still not turning to see her.
“That’s not the way…” Marina said. “That’s not what you said while we rode together today! You were outraged at things like this! Talking to you, I saw you weren’t a monster! The person I was talking to today would not kill an opponent when clearly he had already won! Let that man go, let him down and let him flee! He will not come after us again!”
Nihlen stood silently. The feeling of calm detachment began to slowly disappear as she talked to him. His self awareness was returning, and he looked around at the carnage surrounding him. His clothes were stained with blood, and bodies were all around.
What have I done? He wondered, feeling himself slipping into shock. I knew what I was doing… But at the same time it was all a blur. Like someone else was in control…
Nihlen soundlessly dropped the man he was holding, and turned away from him, toward Marina.
Slowly her expression changed. A look of shock and fear began to appear on her face. Just as it had with the other men. Silently she stared at him, her mouth open slightly. Then, just as Nihlen opened his mouth to say something, Marina beat him to it.
Her blood curdling scream echoed through the night.
* * *
Thank you Benjamin for taking part in my Author Spotlight interview!  I hope your writing continues to flourish and we hope to see more of you in the future.
*****
If you or an author/illustrator you know is interested in being interviewed, feel free to send me an email at jejoescienne@yahoo.com
Posted by Jenna Elizabeth Johnson at 9:11 AM