Sneak Peek at Faeleahn - A Novella of the Otherworld - AVAILABLE SOON!

Hello Readers!  It's been so long since I've posted anything new here and I do apologize.  My author schedule has kept me quite busy this year, especially for the month of May (I have three big book events coming up at the end of the month, so I might be scarce in the coming weeks :P).  Anyway, I do have some good news!

Meghan and Cade are back in a BRAND NEW short story that will be published EXCLUSIVELY in the upcoming Faery Tales bundle - publication date May 18th, 2015!

As I often like to do, I am posting a preview of this newest addition to the Otherworld Series (the first chapter!).  Faeleahn is around 30,000 words (about the length of Ehriad, for those of you who have read that one).  Below I'll include the blurb, as well as the first chapter, for you to check out.  I hope you enjoy it and keep an eye on my Facebook page and, for those of you signed up for my newsletters, your inboxes as well.  I'll be sending out a special newsletter and posting the links when the ebook is up and running.  Until then, happy reading!
- JEJ 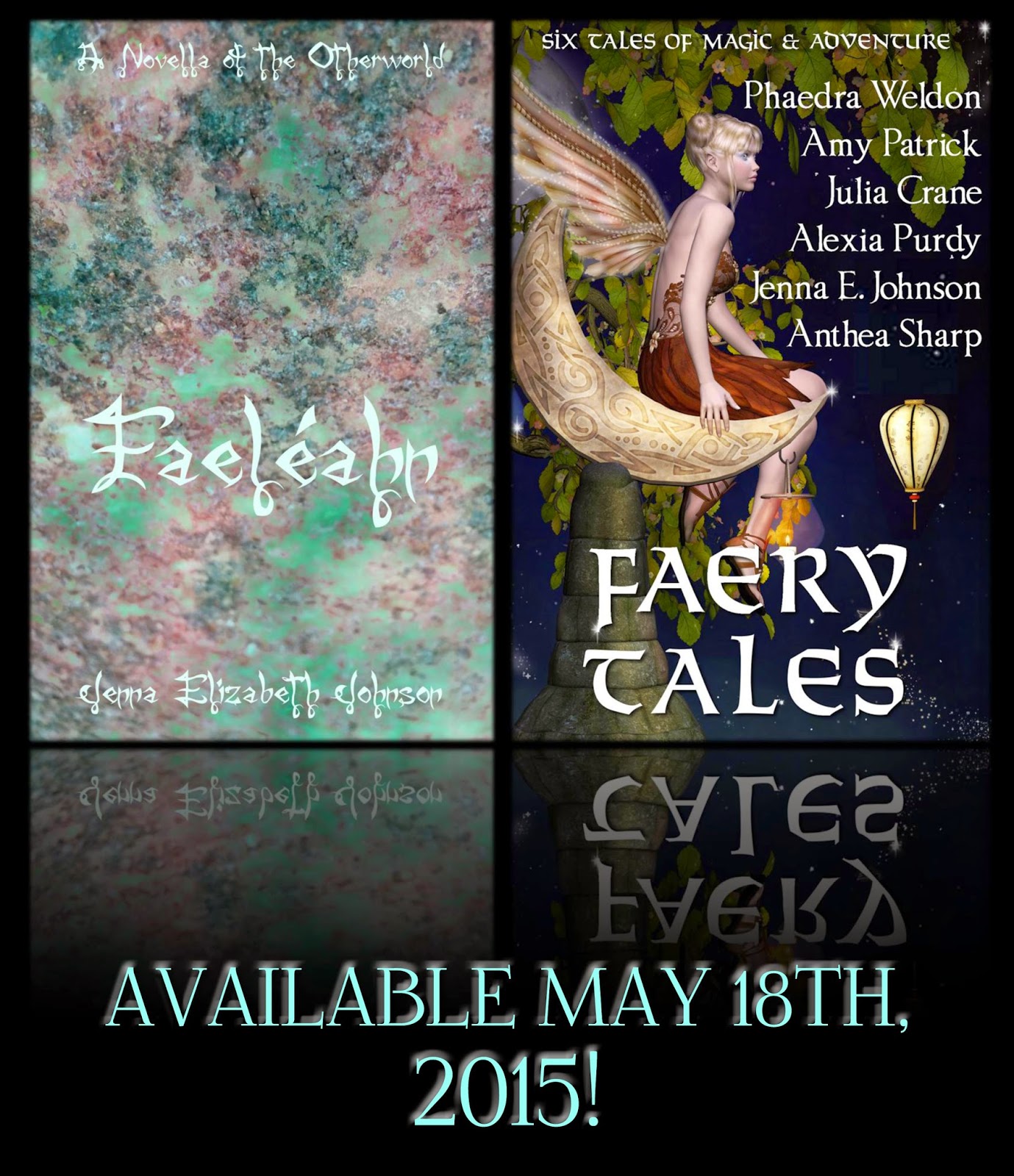 I blinked at my reflection, my Faelorehn eyes shifting from one color to the next.  I tried to get them to settle on a blue shade to go with my dress, but my nerves were too wired.  In less than an hour, I would be Mrs. Caedehn MacRoich, Lady of Castle Luathara.  During that hectic stretch of days, when Cade and I had traipsed about the countryside, spreading the word of our upcoming wedding, I didn’t have a nervous bone in my body.  Now that the day had finally arrived, I was ready to fall to pieces.

Caedehn MacRoich and Meghan Elam have been through more trials and tribulations than most young couples can imagine.  Despite the constant presence of a malevolent goddess bent on destroying them both, and the High Queen Danua doing her best to keep them apart, Meghan and Cade have persevered through it all.  Hardship, pain, mistrust and even death have hounded them nearly as mercilessly as the Morrigan's Cumorrig, yet they never lost sight of one another, or the love that kept them strong through it all.

Now Cade and Meghan are ready to make their relationship official, to pledge their souls to one another in a traditional bonding ceremony of Eile.  Before the wedding, however, they must inform everyone of their intentions.  A month after Cade's proposal, he and Meghan embark upon a two week journey to tell their family and friends of their plans.  Although the goal is to share the news of their upcoming wedding, the faelah bounty hunter and the princess of Erintara grow even closer as their love is reflected back to them by those they hold most dear.

AND NOW, A SNEAK PEEK AT FAELEAHN - A NOVELLA OF THE OTHERWORLD ...

AVAILABLE MAY 18TH, 2015 EXCLUSIVELY IN THE FAERY TALES COLLECTION!

I woke to the sound of spring birds chirping outside the window, their boisterous songs filling the air with joy and promise.  Although I was no longer asleep, I kept my eyes shut, not yet willing to let in the brightness of the morning sunshine.  I could feel it pouring in through the tall windows.  I knew instinctively, without even reaching across the wide mattress, that Cade was already up.  Ever since the ordeal with the Morrigan - his warmongering, glamour-hungry hag of a mother - came to its climactic closure, I had noticed a change in the both of us.  It wasn’t so much a physical change, or, more precisely, it wasn’t a physical change at all.  It was something different, an awareness just beneath my skin.  I imagined this alteration had a lot to do with our glamour.  Perhaps all the time we spent together had trained my magic to recognize his on a level far deeper than I had previously realized.  It was as if my magic could reach out and connect with Cade’s without my even being aware of it.  Then again, it could simply be a side effect of my being completely and unquestionably in love.
Grinning like a fool, I stretched and reached out across the mattress.  As I had expected, Cade wasn’t there.  I tried not to feel disappointed.  I knew he wasn’t far.  Probably out on the patio or walking through the garden.  He might have already dressed and gone down to his study, but he wouldn’t be riding the acreage with Speirling today or venturing into Kellston to address any concerns the townspeople might have.  Today, we were leaving Luathara for a time, and we planned on heading out long before noon.
Taking a deep breath and letting it out slowly, I allowed my eyes to flutter open.  The room was indeed bathed in golden light, the rich color bringing life to the hues in the tapestries, rugs and drapes hanging around our four poster bed.  For a few moments, I simply lay there, cocooned in the soft sheets, tracing the embroidered design in the comforter.  Even after all I had been through in the past few years, I still woke sometimes, sucking in my breath at the absurdity of it all.  Three years ago, I had been one of the awkward nerds at my high school.  I had started out my junior year the same way I approached the previous two: keeping my head down and focusing on getting good grades, so I might get into a reputable college someday.  I had lived a typical teenage life, and other than my moments of insanity when I thought I saw monsters and imagined I heard weird voices, I thought I was pretty normal.  How wrong I had been.
Rolling over in bed, I crooked my elbow and rested my cheek against my hand.  I was facing the glass doors that opened out onto the terrace just outside the room Cade and I shared.  The doors were open, the cool breeze of early spring flowing in and making the gossamer drapes dance like cheerful specters.  The air smelled of lingering frost and the sweet flowers that dared to open this early in Eile.  And beneath it all, I could smell the faint, unique scent of wild glamour.  I breathed it all in as I stretched once again.
A small movement out of the corner of my eye distracted me for a second.  I shot my gaze toward the balcony once more, just making out the shape of a tall figure.  The corners of my mouth curved up, and I felt my body flush with joy.  Cade.  Even after having known him for three years, and having survived everything we’d been through since, I still got chills when I looked at him.  Well over six feet tall and built like a Celtic god, Caedehn MacRoich was the image of any young woman’s fantasies.  I thought back to the first time I had seen him, wondering how I had kept my cool long enough to string more than two coherent thoughts together.  Alright, if I was being honest with myself, I had fallen for his charms quite quickly.  In fact, the sensible Meghan Elam would have smacked the love-struck version of myself upside the head.  Before seeing Cade in all his Otherworldly glory, I would never have gone for a guy like him.  He was too beautiful, too large, too frightening.  Yet, I had kept going back for more.  I had agreed to meet him and listen as he slowly peeled back the wool from my eyes.  And I had fallen fast and hard.  Yet, I didn’t regret any of the decisions that had brought me to this point in my life.  True, Cade and I had been through trials and tribulations, many of them so horrifying I don’t wish to reminisce on them.  But because of those tests, we had grown closer than ever.
I bit my lip and glanced down at my wrist, admiring the beautifully woven and bejeweled bracelet secured there.  It wasn’t just any bracelet, though.  This was the piece of jewelry Cade had given to me over a month ago, when he had asked me to marry him.  Another flurry of chills coursed through me, and I sighed.  The day Cade proposed had been one of the happiest days of my life and I only imagined those days would grow happier.  After all, we were Faelorehn, and we were immortal.  And, we no longer had the Morrigan hunting us like wild game.
I smiled again as I rose from the bed, bringing a sheet with me in lieu of clothing.  As I headed for the open doors, I felt my powerful glamour well up and reach out toward Cade’s.  For so long, we had fought against our common enemy, and finally, finally, we were going to start our new life together.