Kathryn Meyer Griffith, one of the authors who has taken part in my Author Spotlight Interviews, has returned to share with her readers some of her own experiences as an author.  And now, without further ado, here is Ms. Griffith's essay on why she has written some of her books.  Enjoy!


Why I Wrote Evil Stalks the Night


…and also The Heart of the Rose 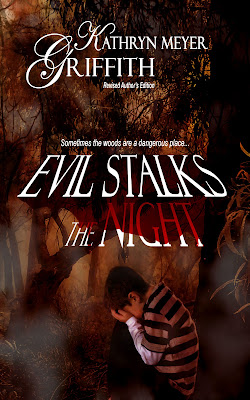 Evil Stalks the Night-Revised Author’s Edition is special to me for many reasons. It was my first published novel in 1984 and as it comes out again on June 1, 2012, rereleased from Damnation Books for the first time in nearly thirty years, it’ll bring my over forty year writing career full circle. With its publication all fourteen, and one novella, of my old books will be out again for the first time in decades. Sure, it’s been a grueling, tedious two-and- a-half year job rewriting and editing these new versions but I’m thrilled it’s over. I have my babies reborn and out in the world again…and all in e books for the first time ever. Now, perfectionist that I am, I can finally move forward and write new stories.


I’ll start at the very beginning because, though Evil Stalks the Night was my first published novel, it wasn’t my first written one.


That first book was The Heart of the Rose. I began writing it after my only child, James, was born in late 1971. I was staying home with him, no longer going to college, not yet working full time, and was bored out of my skin. I read an historical romance one day I believed was horrible and thought I can do better than that!


So I got out my borrowed typewriter with the keys that stuck, my bottles of White-Out, carbon paper for copies, and started clicking away. I’d tentatively called that first book King’s Witch because it was about a 15th century healer who was falsely believed to be a witch but who was loved by Edward the Fourth. At the library, no computers or Internet back then, I did tedious research into that time in English history: the War of the Roses, the poverty, the civil and political strife between the Red (Lancasters) and White Rose (Yorks); the infamous Earl of Warwick and Edward the Fourth.  Edward’s brother Richard the Third.  A real saga. Well, all that was big back then. I was way out of my league, though. Didn’t know what the heck I was doing. I just wrote page after page, emotions high believing I could create a whole book. So naïve of me. Reading that old version now (a 1985 Leisure Books paperback) I have to laugh. Ironically, like that historical novel I’d thought in 1971 was so bad, it was pretty awful. That archaic language I’d used–all the rage back in the 80’s–sounds so stilted now. Yikes! Yet people, mainly women, had loved it.


And so my writing career began. Over 40 years ago now. Oh my goodness, where has the time gone? Flown away like some wild bird. It took me 12 years to get that first book published as I got sidetracked with a divorce, raising a son, getting a real job and finding the true love of my life and marrying him. Life, as it always seemed to do and still does, got in the way. The manuscript was tossed into a drawer and forgotten for a time.


Then years later I rediscovered it and decided to rewrite it; try again. I bundled up the revised pile of printed copy pages, tucked it into an empty copy paper box and took it to the Post Office. Plastered it with stamps. I sent it everywhere The Writer’s Market of that year said I could. And waited. Months and months and months. In those days it could take up to a year or more to sell a novel, shipping it here and there to publishers, in between revising and rewriting to please any editor that’d make suggestions or comments on how it could be better. Snail mail took forever, too, and was expensive. But eventually, as you shall see, it sold.


Now to Evil Stalks the Night.


In the meantime, as I waited for the mail, I’d written another book. Kind of a fictionalized look back at my childhood in a large (6 brothers and sisters) poor but loving family in the 1950’s and 60’s. I started sending that one out as well. Then one day an editor suggested that since my writing had such a spooky ambiance to it anyway, why didn’t I just turn the story into a horror novel…like Stephen King was doing? Ordinary people under supernatural circumstances. A book like that would sell easily, she said.


Hmmm. Well, it was worth a try, so I added something scary in the woods in the main character’s childhood past that she had to return to and face in her adult life, using some of my childhood and my young adult life–my heartbreaking divorce, raising my young son alone, my new love–as hers. It was more of a romantic horror when I’d finished, than a horror novel. I retitled it Evil Stalks the Night and began sending it out. That editor was right, it sold quickly to a mass market paperback publisher called Towers Publishing.


But right in the middle of editing Towers went bankrupt and was bought out by another publisher! What terrible luck, I remember brooding. The book was lost somewhere in the stacks of unedited slush in a company undergoing massive changes as the new publisher took over. I had a contract, didn’t know what to do and didn’t know how to break it. Heaven knows, I couldn’t afford a lawyer. My life with a new husband, my son and my minimum-wage assistant billing job was one step above poverty at times. In those days, too, I was so clueless how to deal with the publishing industry.


That was 1983, but luckily that take-over publisher was Leisure Books, now also known as Dorchester Publishing. A publisher that quickly became huge. Talk about karma.


As often as has happened to me over my writing career, though, fate stepped in and the Tower’s editor, before she left, who’d bought my book told one of Leisure’s editors about it and asked her to give it a read. She believed in it that much.


Out of the blue, in 1984, when I’d completely given up on Evil Stalks the Night, Leisure Books sent me a letter offering to buy it! Then, miracle of miracles, my new editor asked if I had any other ideas or books she could look at. I sent her The Heart of the Rose and, liking it, too, she also bought it in 1985; asking me to sex it up some, so they could release it as an historical bodice-ripper (remember those…the sexy knockoffs of Rosemary Rogers and Kathleen Woodiwiss’s provocative novels?).  It wasn’t a lot of money. A thousand dollar advance each and only 4% royalties on the paperbacks. But in those days the publishers had a huge distribution and thousands and thousands of the paperbacks were printed, sent to bookstores and warehoused. So 4% of all those books over the next couple of years did add up.


Thus my career began. I slowly, and like-pulling-teeth, sold ten more novels and various short stories over the next 25 years–as I was working full time, raising a family and living my hard-scramble life. Some did well, my Leisure and Zebra paperbacks, and some didn’t. Most of them, over the years, eventually went out of print.


And twenty-seven years later, when publisher Kim Richards Gilchrist at Damnation Books contracted my 13th and 14th novels, BEFORE THE END: A Time of Demons, an apocalyptic end-of-days-novel, and The Woman in Crimson, a vampire book, she asked if I’d like to rerelease (with new covers and rewritten, of course–and all in ebooks for the first time ever) my 7 out-of-print paperbacks, including Evil Stalks the Night–I gave her a resounding yes!


Of course, I had to totally rewrite Evil Stalks the Night for the resurrected edition, as well as my other early novels, because I discovered my writing when I was twenty-something had been immature and unpolished; and not having a computer and the Internet had made the original writing so much harder. Also in those days, editors told an author what to change and the writer only saw the manuscript once to final proof it.  There were so many mistakes in those early books. Typos. Grammar. Lost plot and detail threads. In the rewrite I also decided to keep the time frame (1960-1984) the same.  The book’s essence would have lost too much if I’d updated it.


As I finished the final editing I couldn’t help but reminisce about all the life changes I’ve had since I’d first began writing it so many years ago. Though it was actually published in 1984, I’d started writing it many years before; closer to 1978 or 1979. I’m as old as my Grandmother Fehrt, my mother’s mother and who the grandmother in the story was loosely based on, was back then. While I was first writing it so long ago, I was a young married woman with a small child holding down my first real job and trying to do it all. Now…my Grandmother, mother and father have all passed to the other side. Many other family and friends I’ve left behind, too. I miss them all, especially my mom and dad. It’s strange how revising my old books reminded me of certain times of my life. Some of the memories I hid from and some of them made me laugh or cry. This book, though, is the most autobiographical of all my novels as it contains details of my childhood, my devastating divorce, and what my life was like when I first met my second husband, Russell, who’s turned out to be my true love. We’ve been happily married for thirty-four years and counting. Ah, but how quickly the years have clicked by. Too quickly. I want to reach out, at times, and stop time. I want more. I have so much more life to live and many more stories to write.


So Evil Stalks the Night-Revised Author’s Edition (http://damnationbooks.com/people.php?author=79 ) republished by Damnation Books/Eternal Press will be out again for the first time in nearly thirty years on June 1, 2012, and I hope it’s a better book than it was in 1984. It should be…I’ve had over thirty more years of life and experiences to help make it so.


Written this 1st day of June, 2012 by the author Kathryn Meyer Griffith


My books (all out again from Damnation Books http://damnationbooks.com/people.php?author=79 and Eternal Press http://www.eternalpress.biz/people.php?author=422): Evil Stalks the Night, The Heart of the Rose, Blood Forge, Vampire Blood, The Last Vampire, Witches, The Nameless One short story, The Calling, Scraps of Paper, All Things Slip Away, Egyptian Heart, Winter's Journey, The Ice Bridge, Don't Look Back, Agnes novella, In This House short story, BEFORE THE END: A Time of Demons, The Woman in Crimson, The Guide to Writing Paranormal Fiction: Volume 1 (I did the Introduction) ***