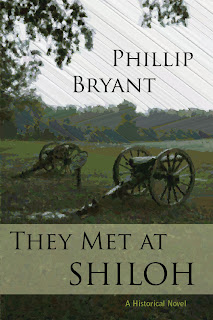 They Met at Shiloh, Historical and Military Fiction. In two of the most bloody, horrific days of the war, April 6-7, 1862, shocking for their unbridled carnage, Confederate and Federal meet on the fields and farms surrounding a tiny Methodist church. Its peace broken, Shiloh grips those who trample its fields to make war.

When I was in college a friend of mine wrote a short story with a group of us as main characters. People loved it. While I was on leave from Army basic training I thought I'd put my hand to writing a novel with all of my friends as characters. It would follow that characters would inevitably meet personally at various points, be they enemy or friend. It had the affect of describing what any war tale would, the meeting in battle but also the more interpersonal interactions of my characters with one another.

A minor character, a young dutchman named Huebner. I like underdogs and though I seem to rarely write them as main characters I like to have my mains have to deal with irritants. Huebner is a simpleton, a waif, a knave embodying the innocence of youth and someone of low intelligence. He is simple, though, and driven by simple faith and belief in his own failing of honor (he and his comrades have fled the battle).  He is the unlikely hero of one of my stories. He is the kind of person I would want to be in action and dedication, having the courage to do what is right.

Robert Mitchell, one of my main characters (of four total) is my least favorite for his lack of understanding and inability to reciprocate the friendship of Huebner, who genuinely calls Robert his friend throughout the novel. Robert is more like me than I care to admit and judges people by what they can do for him and not what they represent as a friend. Robert tolerates Huebner like one might a little brother but without the bond of blood or love.


5. If you could change ONE thing about your novel, what would it be?  Why?

I would probably change the beginning chapters and remove some of the backstory, it has tended to be a little slow in the beginning.

The 150th anniversary of the battle of Shiloh is this April, a reenactment to happen the weekend of March 29th through April 1st, 2012. Events in They Met at Shiloh can be followed by taking the Shiloh Military Park's driving tour in Hardin County, Tennessee. The last scene in the novel takes place at what became known as Fallen Timbers for the multitude of fallen tree trunks left from a severe storm. The Civil War Preservation Trust is trying to purchase 275 acres of this spot and add it to the National Park land.

I've been a civil war reenactor, lead a drama group, sing, and paint 1/35th scale model soldiers. I'm an IT administrator for an international company.

A short story titled Two Struck Images about two daguerreotype images found long after the civil war of two brothers and what happens to them. The follow on to They Met at Shiloh called River of Blood following a few of the characters after Shiloh and to the battle of Stone's River over Christmas, 1862 by the time of the 150th anniversary of that event next year.

Know why it is you are choosing how to publish and do your research thoroughly. I made some initial mistakes with pricing and cover blurbs and hiring an editor. We engaged an editor for both grammar and story flow but didn't shop and price, possibly spending too much. I did not discover Kindleboards until long after we'd put the kindle version up and could have used more informed decision making early on. You can edit forever, but you will need to decide where to end it and decide it has been enough. Take advantage of the freedom of Indie publishing, not because you think you aren't good enough for the Big 6 but because there is benefit for both earning power and creative control over the whole process.

Advice on writing and anything you can do to learn is great, but hold to your method and whatever allows you to write and keep writing. Experiment, add to your bag of tricks but know and stick with what works.


Rising, rising, rising was the terrible sound of death and destruction all about them. Their own skirmishers steadily pushed through the muck and reached the tree line, disappearing into it. In front of Stephen, sitting in the water and nursing a shoulder wound, sat a skirmisher. His face was creased with pain and weariness, his clothes were soaked with brackish water, and his rifle was resting upon his good shoulder. A lone Federal forage cap lay a few feet from him, its crown laying upside down, its owner nowhere to be seen. Further on in the wood line, half submerged in the backwater, lay a Federal skirmisher with only his waist and legs visible. Stephen drew nearer and saw that the man’s arms and head were under water. A pool of red spread upon the surface of the water. Stephen had to step lightly so as not to kick the man as he marched past.

The skirmishers made a ragged chorus of hoots and hollers when they finally entered the tree line and found drier ground and surer footing. Ahead, he caught short glimpses of the enemy skirmishers ascending a long steep hill. At its crest stood an enemy camp. The sight of the enemy’s tent line brought another chorus of yips and yells from the whole of the brigade. The moment of truth was near.

After what seemed an intolerable pause and reshuffling of the brigade regiments in line of attack, the moment arrived.

At the command came the emanation meant to strike fear into any Federals for miles, the queer, high-pitched yipping that was the trademark battle cry of the Confederate fighting man. The trees resounded with the yell. The three regiments tapped for the attack stepped off proudly. They cleared the trees that had hitherto shielded not only them but the enemy, as well. Stepping into the open, they beheld a sight that might have dampened the spirits of lesser individuals. Arrayed before them on the top of the steep hill was a long unbroken line of blue.

Shouting and yelling, Stephen girded himself once more for what he hoped would be another short succession of volleys followed by their triumphant entrance into the enemy’s camp. With their color guard stolidly marching ten paces in front and leading them ever upward, all sense of danger and foreboding was drowned out in the rush of movement.

The long blue line erupted in a cloud of rushing smoke. The crack of the report engulfed their yelling and caused Stephen’s heart to skip. The zinging of lead filled the air and stung the ground, sending chips of sod flying into the air and bodies crumbling earthward.

For an almost imperceptible instant, the rebel yell was hushed, replaced by the gasps and groans of the inflicted. As if the air had been sucked from their lungs, they ceased their cry. Men gasped at the suddenness of the enemy’s destructive fire. The vacuum was soon filled by the guttural and manly huzza from the Federal line atop the hill. Without order, the movement forward halted. Stephen scarcely perceived that he and his pards were no longer moving at all. He, himself, was riveted by the sight of the man lying at his feet. Known to him only as Ox, the man was hardly to be recognized without the top of his head.

“Forward, forward!” rang the voice of Colonel Thornton from astride his horse at the rear of the regimental line. “Forward, march!”

Reinvigorated, the regiment and cry resumed with a greater intensity. The cry steadied Stephen’s mind, and the fear that had spiked in that instant Ox fell was forgotten. The hill was steeper than it had appeared from its base. The effort to keep up the pace told upon his legs. They were close enough now to see individual faces in the enemy formation, faces that didn’t look much different from their own, faces with names and histories and families and hopes for survival. In these faces, too, were fear and that particular look of men in a desperate situation.

“At the double quick, march!”

They gave one last shout and jogged forward. Stephen brought his weapon to the position of port arms and braced himself for the clash.

The long line of blue vanished once again in a cloud of sulfur and smoke. In that instant, the words of his father echoed in Stephen’s mind.

“I looked, and there before me was a pale horse! Its rider was named Death, and Hades was following close behind him.”


Thank you Philip for taking part in my Author Spotlight interview! I hope your writing continues to flourish and we hope to see more of you in the future.
*****
If you or an author/illustrator you know is interested in being interviewed, feel free to send me an email at jejoescienne@yahoo.com
Posted by Jenna Elizabeth Johnson at 5:00 AM