In and Out of Character: Interview with Jaax from the Legend of Oescienne Series 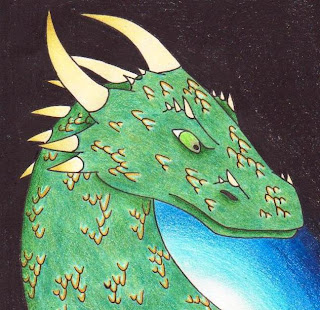 1. Let’s start out with an easy question: since today is National Appreciate a Dragon Day, can you tell us why we should take a moment to appreciate your kind?
A very good question, and I have a very good answer: when human beings flourished in Ethöes, it was the responsibility of the dragons to tutor them and guide them to become a more learned race.  Dragons have always played an important role in this world, and I hope my kind will have the chance to make a difference once again and purge Ciarrohn and his ilk from the world.
2. Can you share one thing you regret and tell us why?
A tough question, but the one thing that comes to mind is the time I’ve spent with Jahrra so far.  I regret staying away as long as I did when she was very young.  It has caused a great chasm between us, one I hope we are finally beginning to mend.  If I could go back and do it all over again, I would have made more time to visit her and get to know her.
3. Do you have any heroes?
A few.  Traagien of course, for his bravery and perseverance in destroying Ciarrohn once before.  Most Tanaan dragons look up to Traagien since our race was modeled after him, when the Crimson King set a curse upon our kind.  I guess those humans who had been cursed to be dragons for the rest of their lives found some solace in resembling the single dragon who had defeated Ciarrohn before.  I guess it’s our way of holding onto hope.
Another hero of mine is Hroombra of course.   Without his patient guidance I would have been lost several times over.  Besides, he helped me to understand Jahrra more than I would have been able to accomplish on my own.
4. In The Awakening, we learn that you head the Coalition for Ethöes, an elite group of dragons and other beings that make it their goal to plan and prepare for the day they’ll be needed to help restore the world to how it was  before the Crimson King gained power.  Have you always wanted to be a leader, or was it something that fell into your lap?
I was never expected to be much of a leader, but life seldom paves an easy path for those who walk it.  Fortunately, when I realized that my role in restoring Ethöes would be greater than I had first thought, I had someone to help guide me along the way.  Although I don’t feel absolutely sure of where I’m heading, I at least feel a little more confident in my chosen path.
5. In the first chapter of The Finding, we learn that you have been searching for the promised human child for centuries.  Can you describe what it was like when you first realized your search was over? 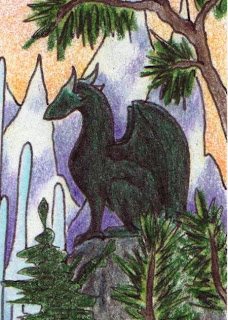 Exhilarating, terrifying and miraculous, all wrapped into a single emotion.  I can’t really describe it.  I had been searching for Jahrra for so long that I had started simply going through the motions; arriving at a location after learning a human child had possibly been found and not even bothering to give the infant a second glance.  But for some reason, Jahrra was different.  Although I had a hard time believing it, there was something about her aura, a life force too powerful to be contained in such a young infant.  It felt like my scales were standing on end for a good week after deciding she was the one.
6. In The Beginning, you arrive in Oescienne just after Jahrra has won a prestigious horse race.  It was clear that you were very angry with her for lying to her mentor, Hroombra, but did you feel any pride at all?
I’ll admit it, I was extremely angry with her, but it wasn’t truly her fault.  If I remember correctly, the reason I had rushed to Oescienne was because of some worrying information I’d received from other members of the Coalition, information that suggested she might be in trouble.  To arrive at the Castle Guard Ruin and learn no one knew where she was was tantamount to a lance being driven through my heart.  My anger at her was a result of her terrifying us all to death.  But I had also never been more proud.  Unfortunately, my fear and anger burned too fiercely to let any of that pride show.
7. Jaax, you are really good at putting on a harsh face and hiding your emotions.  How have you become so good at this talent and are there ever times where you feel that your mask is slipping off?
Years and years of practice.  In my line of work, one cannot afford to betray a stray emotion.  If the enemy can read you, then you might as well just tell them what your weaknesses and strengths are.  I fear that perhaps over the centuries I have become too good at being harsh and cold at times, but if that’s what it takes to keep Jahrra and the Coalition safe and to meet our end goal, then I will continue to do.
Have I ever felt the mask slipping?  Yes, but usually only when I’ve gotten into another, let’s say heated discussion, with Jahrra.
8. At the end of the third book, we learn that you and Jahrra must once again flee from a place that has become a home for the both of you.  Can you give us any clues as to where you are heading and what we might expect from you and your ward in the next book?
Of course, I cannot predict the future.  You would have to ask a Mystic for that.  What I can promise is that we will head further north, into the mountains, our final destination being Nimbronia, the great frozen city of the Creecemind dragons.  And although I can’t tell you exactly what to expect, I can promise there is a very high possibility of several more arguments arising between Jahrra and I.  Fortunately, we’ll have Ellyesce to help act as a mediator.
9.  And finally, if you and Jahrra manage to defeat the Crimson King, do you think the remaining Tanaan dragons will become human once again?
That is a hard question to answer, because I fear I don’t have the expertise or knowledge to answer it properly.  I hope that is what will happen, but I cannot say for certain.  Ciarrohn wields dark magic, and with curses formed from such magic, one can never know how the curse will be broken or if it can be broken at all.  I only hope that Ethöes will keep her promise, as she has with Jahrra and that when this is all over, the Tanaan prince of Oescienne will be restored and Ciarrohn’s evil will be purged from our world forever.
* * * * *
If you would like to read Jaax and Jahrra’s story, you can get the Legend of Oescienne books from amazon.com in paperback and ebook format, and from barnesandnoble.com in ebook format.
* * *
If you have an ereader other than a Kindle or a Nook, you’re in luck!  The Finding (Book One) is currently FREE from smashwords.com and is offered in many different electronic formats for the ereader of your choice.  It is also FREE for the Nook on barnesandnoble.com
* * * * *
Thank you for reading this interview with Raejaaxorix, a character from the Legend of Oescienne series!  If you would like to read more interviews of the other characters from these books, send me an email at jejoescienne@yahoo.com
Posted by Jenna Elizabeth Johnson at 6:00 AM