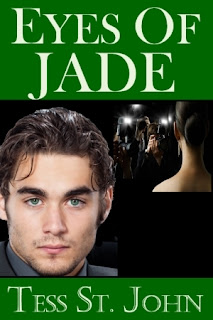 1.Quickly, give us the title and genre of your book and a 30-word or less tagline:
Title: EYES OF JADE
Genre: Romantic Suspense
Tagline: After multiple attempts on her life, Superstar Eve Knight must put her fate in the FBI. She never expected her heart, along with her life, would be at risk.
2.How did you come up with the title of your book or series?

My hero’s eyes are green and lifeless when the book begins, just like uncut pieces of jade.
3.Who is your favorite character from your book and why?

That’s a tough one...I like both the h/h, but if I had to pick one, it would have to be Jake Dane, the hero. He’s a tortured, haunted, sweet man.
4.How about your least favorite character?  What makes them less appealing to you?

I guess that would be the heroine’s sister. She’s spoiled, selfish, and only interested in what will get her to her sister’s star-status.
5.If you could change ONE thing about your novel, what would it be?  Why?

Nothing.
6.Give us an interesting fun fact or a few about your book or series:

EYES OF JADE is part of my Undercover Intrigue Series and it’s about FBI agents finding their HEA.
7.Do you have any unique talents or hobbies?

Unique talents??? That’s a tough one. Painting, I guess, although I haven’t painted in a years, these days I’m more into drawing.
8.How can we contact you or find out more about your books?

You can find me at http://www.tessstjohn.com/
9.What can we expect from you in the future?

I have four or five books in my Undercover Intrigue Series (only 2 are out, but book 3 will be out soon), I have a historical romance out which is part of my Chances Are Series (It will have at least one other book in that series, probably more...I haven’t decided yet), and I’m hoping to get a contemporary romance series and Scottish historical short story series out in years to come. Oh, and a screenplay I’ll be working on it 2013.
10.Do you have any tips for readers or advice for other writers trying to get published?

WRITE, WRITE, WRITE! Find some really good critique partners (people who write well) who will be honest with you and you’ll be set.
11.Is there anything else you’d like to say?

Thank you so much to Jenna for having me!
12.And now, before you go, how about a snippet from your book that is meant to intrigue and tantalize us:
Jake and Stewart followed her to the elevator.
Once on her floor, dim lighting lit the wide hallway. Stewart stayed at the elevator.
Eve fumbled in her purse and finally pulled out her keys. Her hands, still shaking, caused the keys to clink together. Bringing her to the warehouse might not have been a good idea.
Without a word, Jake gently took the keys, wanting to check inside first to make sure everything was clear. But with the security here, it probably wasn’t necessary. He unlocked the door and twisted the knob.
Another door down the hallway slammed.
A clatter rattled behind him.
He turned to find Eve had dropped her purse, the items scattering everywhere.
The man who banged his door boarded the elevator, then Jake let go of the apartment door and knelt beside Eve to help gather her things.
She brushed a lock of hair from her eyes. “I’m sorry. I’m not usually this much of a—”
Deafening gunfire drowned out her apology.
Jake launched himself forward and cradled Eve’s head in his hands.
They tumbled to the floor.
He rolled until his body covered hers. His arms encircled her head and he buried his face against her neck.
Blasts exploded over them. One after another.
Again and again.
Eve’s body tensed beneath his—her hands gripped his sides, pinching his skin.
The rapid-fire machine gun shots vibrated through Jake. The earsplitting blows rocked him harder into Eve. His body imprisoned hers to the unforgiving marble floor. But he couldn’t lift his weight without exposing her head.
With the impact of each shot, something struck him in the back of the head and shoulders, probably debris from the wall.
Abruptly, the gunfire ceased.
Still sprawled on top of Eve, he lifted to support his weight on his forearms and grabbed his gun from the shoulder holster. When he tried to move, she clasped his sides harder. “Please don’t go.”
Weapon drawn, Stewart hustled toward them. “I’ll check the apartment.”
Jake knew no one was there. If an actual person was shooting, he and Eve would be dead. He looked down at her.
Her soulful eyes were stunned, her terror horrifyingly real. He leaned his head down until their cheeks touched, sheltering her with his body, allowing her to catch her breath. Her shallow pants echoed in his ear.
A subtle scent of lavender caught him, either her shampoo or perfume.
Her breathing began to ease when a door down the corridor creaked open. She squealed, grabbed his shirt, and pressed her forehead to his chest.
Jake aimed his gun toward the door, his body still prone over hers—protecting her.
* * *
Thank you Tess for taking part in my Author Spotlight interview!  I hope your writing continues to flourish and we hope to see more of you in the future.
*****
If you or an author/illustrator you know is interested in being interviewed, feel free to send me an email at jejoescienne@yahoo.com
Posted by Jenna Elizabeth Johnson at 5:00 AM