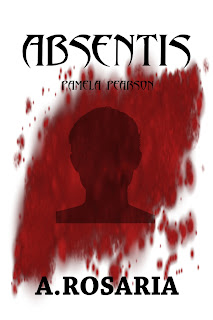 1.  Quickly, give us the title and genre of your book and a 30-word or less tagline:
Absentis. I challenged myself I would write 20 short stories within a years' time. Absentis is the first one I finished. It's a ghost, haunted house story.
Pamela Pearson, a young police detective, knocks on a door. Little does she knows what is waiting for her at the other side.
2.  How did you come up with the title of your book or series?
I wanted a title relating to people gone missing. First I thought about calling it Missing Person, but thought that to be a little cliche and bland, so instead I searched for a word in Latin that had the same meaning. Absentis means; absent, missing, away, gone. I liked the word and the meaning was close enough to the story.
3.  Who is your favorite character from your book and why?
Pamela Pearson, the main character. She has her heart and mind in the right place, albeit a bit naïve to the realities of the world, however she gets herself into something so off from that what she knows, that whatever hardships she may have had pales in comparison, but despite all that she keeps a rather level head. Till the end.
4.  How about your least favorite character? What makes them less appealing to you?
That's a difficult one. I can't really say.
5.  If you could change ONE thing about your novel, what would it be? Why?
I'm satisfied with the way it turned out. I could have done a bit more on the cover, but with having 19 stories left to write and covers to design I didn't want to take too much time making the cover better. It's just details I wanted to add, like I wanted to give the title some more depth, some kind of 3D feel.
6.  Give us an interesting fun fact or a few about your book or series:
My very first novel “Finitum” has a scene about a male genitalia and an ashtray that I don't know how I came up with. I must have drunk one beer too many.
7.  Do you have any unique talents or hobbies?
I took up running recently, I challenged(yes another one) myself I would run the 5km in 15 minutes. It's a near impossibility for a guy my age, but you never know for sure if you do not try. Now I'm obsessing with running. I even made a blog about this challenge to keep me on course. Relating my journey in doing the impossible. http://therunchallenge.wordpress.com/
8.  How can we contact you or find out more about your books?
I've got another blog http://creationofanovel.blogspot.com/ about my writing, writing in general, and books.
A website http://www.alexrosaria.com/
A twitter account www.twitter.com/#!/adarosaria
And I'm also available at goodreads www.goodreads.com/author/show/4719199.A_Rosaria
9.  What can we expect from you in the future?
Well I've got 19 more short stories to write and I'm working on a story about a Vampire that would make the sparkly Twilight vampires shudder in fear.
10.  Do you have any tips for readers or advice for other writers trying to get published?
Readers: Read whatever your heart desires.
Writers: Write whatever your heart desires, when there is want in your writing it will be better than if there is a must in it.
11.   Is there anything else you’d like to say?
Checkout my other stories:
Don't Believe What They Say (Ghost Story)
Jake walks his dog at predawn under the full moon, when the layer between the supernatural and reality is thinnest.
He has no way to fathom that this time might be his last.
F.C.F. That Within (Sci-Fi/Horror)
Stranded on a moon, his unit dead.
The outpost a distance away, not enough oxygen to get there.
A bug infestation going on, and he's the only one alive to deal with it.
Sergeant T. Black the only survivor left to exact revenge for her betrayal.
Revenge in space is sweetest.
Finitum (Horror. My first novel)
John Lone had to deliver a package to a secluded cabin in the forest, later that day he had an important date planned with his girlfriend Linda.
A simple routine trip he took many a time turned out bad. Supernatural creatures stalked within the forest and beyond for any innocent prey they could devour and now their aim was on John.
John will have to fight for his live to get out, to get back to society, back to his girlfriend Linda, and his only chance to a happily ever after, but this is no fairy tale.
12.  And now, before you go, how about a snippet from your book that is meant to intrigue and tantalize us:
“She felt a shiver travel along her spine. No, she wasn't alone, she suspected whatever it was wouldn't care about her dropping her gun, however she was afraid of what it did care about.”
* * *
Thank you Alex for taking part in my Author Spotlight interview!  I hope your writing continues to flourish and we hope to see more of you in the future.
*****
If you or an author/illustrator you know is interested in being interviewed, feel free to send me an email at jejoescienne@yahoo.com
Posted by Jenna Elizabeth Johnson at 5:00 AM