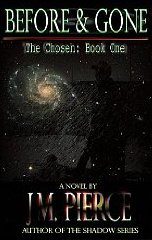 1.  Quickly, give us the title and genre of your book and a 30-word or less tagline:
Before & Gone is the first book in my new series titled “The Chosen”. It is an Apocalyptic Science Fiction/Fantasy.
In the blink of an eye, everything that was before is gone. The human race struggles for existence. Are those that have been chosen really the lucky ones?
2.  How did you come up with the title of your book or series?
It came to me while writing a scene for the book. One of the characters said something that struck the right notes and there it was!
3.  Who is your favorite character from your book and why?
My favorite would be Shiloh. He is a stand-up kid who gets dealt a tough hand to play.
4.  How about your least favorite character?  What makes them less appealing to you?
Matt would be my least favorite. I don’t know that I can say why without giving something away. ;)
5.  If you could change ONE thing about your novel, what would it be?  Why?
That would have to be the cover. Don’t get me wrong, I like the cover, but it just isn’t quite right. Hopefully I can have something new within the next few months.
6.  Give us an interesting fun fact or a few about your book or series:
It is set in Tennessee. It turns out that one of my readers is from the same town where the main character goes to college! I have to think that would be fun for her.
The word “OBSOLESCENCE” is of major importance and may just be the longest word I’ve ever used in any of my books! LOL!
7.  Do you have any unique talents or hobbies?
I am an amateur herpetologist with an extremely understanding wife. I have nearly one-hundred snakes living in my basement at any given time.
I am also a musician, though admittedly I play very little since I began writing. Music used to be my one creative and emotional outlets. Writing has now taken over!
8.  How can we contact you or find out more about your books?
I would love to hear from those that read my books! You can email me at:
authorjmpierce@yahoo.com
I do have a blog that I am attempting to be more active with, and you can visit it here:
http://jmpshadowseries.blogspot.com

And here is another blog that encompasses everything that I do: