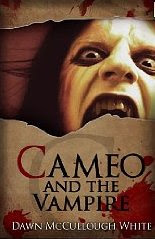 My series is called The Trilogy of Shadows, books 1-3 are:  Cameo the Assassin, Cameo and the Highwayman, Cameo and the Vampire and it's genre is Dark Fantasy.
Tagline- ~Sometimes the anti-hero is the only hero you can find.

2.How did you come up with the title of your book or series?

Well, I wanted the first book to be strong and direct- Cameo the Assassin.  At the time I had no idea I was going to write two more, but when I did I just decided to keep them consistent, so then the second and third books are “Cameo and the Highwayman” and “Cameo and the Vampire”.  David Dalglish named my series “Trilogy of Shadows”.

Cameo.  I guess I like that she is all the things a heroine is not supposed to be: stronger than the male leads both mentally and physically, not beautiful, and at times evil.

4. How about your least favorite character and what makes them less appealing to you?

Avamore.  I find him downright dull, though a necessary component to the story.  Don't worry he isn't in too many scenes due to me finding him dull.

5. Give us an interesting fun fact or a few about your book or series:

Well, okay... Black Opal's looks are inspired by how Johnny Depp looks at the very end of the film “The Libertine”.  In that movie he plays John Wilmot and he's dying of syphilis.  That was kind of a big secret, but now you're the first to know.

6. Do you have any unique talents or hobbies? 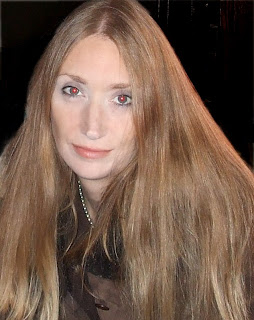 Yes, I do.  My unique talent is that I can tell what year a movie came out... without googling it.  And, by this I mean from the beginning of movie-making history until present day.  Not a very useful unique talent.
7. How can we contact you or find out more about your books?

I have a Facebook fanpage that I update all the time, it's: http://www.facebook.com/pages/Dawn-McCullough-White/125763474137312
My website is: DawnMcCullough-White.com
I also have a book trailer which can be seen on YouTube.

8. What can we expect from you in the future?

I have a story coming out in an anthology in Feb 2012, it features one of the characters from my trilogy, and there are plenty of other great writers involved. The anthology is called- “The Gate 2: 13 Tales of Isolation and Despair”.  I'm also currently writing the first book in a second trilogy that will take place in Faetta (the same world my original trilogy transpires) fifteen years later, and some of our favorite characters from The Trilogy of Shadows will have a part in this series as well.

Huge, huge, huge thank you to my cover artist Kurt Hanss, who always comes through with a fantastic cover for me.

10. And now, before you go, how about a snippet from your book that is meant to intrigue and tantalize us:

From Cameo and the Vampire~

Cameo knocked her to the floor.  "You turned me in?"

Blood trickled from her victim's ear, ebbing in one long, exquisite ribbon onto into her hair.  For a moment Cameo hesitated, transfixed ... and then, when she realized the woman was unconscious and broken, just the same as she was when Haffef had smashed in her skull, she was repelled by her own actions.

One of the soldiers kicked the door open, and Cameo swung around.  Immediately she seized the pistol from his hand and buried her dagger into his side.

"C'mon," she cajoled her next opponent to enter.  This was no time for bravado, but still this was becoming old, and she was growing tired of killing people.  She was getting too good at killing humans.
* * *

Thank you Dawn for taking part in my Author Spotlight interview!  I hope your writing continues to flourish and we hope to see more of you in the future.
*****
If you or an author/illustrator you know is interested in being interviewed, feel free to send me an email at jejoescienne@yahoo.com
Posted by Jenna Elizabeth Johnson at 7:00 AM