Hello Readers!  It's been a while since I've posted anything new here, but I've been busy working on lots of little projects and one big project in the Otherworld series.  Although some of these books in progress won't be ready in the near future, I can announce the arrival of ONCE UPON A STAR, the latest installment of the Once Upon Anthology series.

ONCE UPON A STAR will launch on Monday, February 18th, and will feature fourteen all new faerie tale retellings with a science fiction twist!  My contribution is titled BY THE LIGHT OF A DISTANT STAR and is a retelling of The Goose Girl.  I had so much fun writing in this genre, one I've never attempted before, and I hope you enjoy the story as much as I enjoyed writing it.  Happy reading!
- Jenna 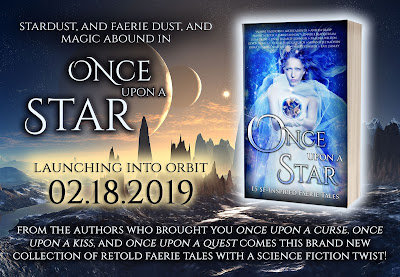 Princess Estrelle’s marriage to Prince Damryn of Kaul is not just a means to establish a lucrative trade agreement between two galaxies, but a chance for her to begin a new life.  But Estrelle’s fairytale future is put on hold when the woman transporting her to her new home steals her identity and leaves her for dead.  With the help of her newfound friends, Estrelle discovers the courage to face her enemy and to fight for the one she has grown to love.

AND NOW FOR A SNEAK PEEK OF BY THE LIGHT OF A DISTANT STAR!

Posted by AuthorJEJohnson at 10:26 AM