Hello Eager Readers!  For the next five days, I'll be sharing a post a day written by one of the authors featured in the PLAGUE OF DRAGONS anthology (Now Available!).  Today we're going to start with the fabulous KATIE SALIDAS and some thoughts regarding dragons ;). 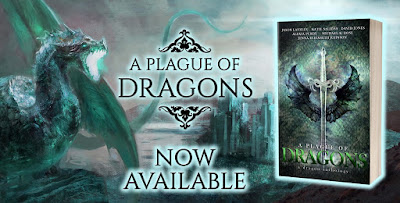 Let’s talk dragons, shall we?

Why don’t we see many dragons flying around or burning down cities? Probably because they, just like us, have had to grow and adapt with time. Rise beyond the firebreathing image to something a bit more…

Maybe dragons exist and we just don’t know it. And that is the kind of thinking that led me to dragons as shifters in the story, Molten Heart.

Dragons belong just as much to the human world as we do. And really, calling it the human world might piss them off, because they think we’re a bit irresponsible with the world we’ve taken over. So let’s maybe just stick to calling it earth. It will make life easier on us all. Trust me. Most dragons are good, but piss off the wrong one….

Anyway. Back on point. Dragons could possibly be the very first breed of shifters. Over time as they grew and adapted with time, maybe they learned how to change forms. All creatures on earth have had to grow and adapt over the years or risk extinction. And though dragons might seem like the king of beasts, there is a greater beast on this earth that strikes fear into the hearts and minds of all creatures who share this planet… man!

Was that too preachy? Sorry. Moving on.

That leads us to the question of their (the dragons) nature. Are they beasts? Are they thinking and feeling beings. And if the answer to both of those questions is, yes. What is dominant in them and how does it work when they shift between forms?

I’d have to answer that with turning it back around on humanity. We’re thinking and feeling beings who act absolutely beastly without shifting into a twenty-foot tall firebreathing creature, so why would a dragon who has the ability to swap forms be any different? In both their impressive drake form and in their tiny (by comparison) human form, the character is the same. Their minds stay intact as well as their ability to reason and understand their surroundings. It is merely their appearance, and fire-proofing, that alters.

Well, who doesn’t want to be able to take to the sky? Admit it, if you could sprout wings, you would.

As far as my dragons are concerned, their drake form is their natural form. They take on the human guise to keep their truth secret from the savage humans who rape and pillage the earth they live on.

But, that might be giving too much away. Let’s chat about more fun dragon facts, like what they eat.

My Dragons are actually omnivores (because of their dual forms) but because of their massive size need more protein than their human counterparts. That of course leads to quite a bit of meat consumption. They’ll eat pretty much anything that moves. Sheep, cow, pig, etc… Fish too, for the water variety (the hydras). And when you have a colony of dragons around, there had better be quite a bit of available food.

How much do they eat? Well, that’s a great question. On the island they live on herd of wild sheep and ponies are pretty prevalent so that is the natural meal of choice for a dragon on the hunt. Bunny en flambé though is a favorite snack. Food is energy for the dragons, not an indulgence. Participating in the circle of life (cue the Lion King music), means that the dragons only take what they need when they need it. Could a dragon glutton himself on six or seven fully grown mountain goats with a side of squirrel every day? Of course they could. But eventually overhunting leads to extinction, and they know that. They are thinking and feeling creatures, remember.

On average, a male drake will sustain themselves on one meal a day consisting of two to three large prey animals.

I know what you’re saying. Dragons are fantasy creatures. They cannot exist in nature. Why are you spending so much time pretending that they’re real?

That’s my job. As the author I have think of all the little details and physical attributes necessary to validate my dragons. Even if all of these details do not end up in the final story, the world and character building has to be there first. Laying the foundations so that I can tell you a believable story. Do I think dragons exist? Doesn’t matter. But if for one second, just one, I can make you suspend your belief, then I have done my job!

Thank you for the guest post, Katie!  You can find out more about Katie Salidas on her website: http://www.katiesalidas.com/
Posted by AuthorJEJohnson at 9:00 AM