The Otherworld in the Mortal World - Episode Two 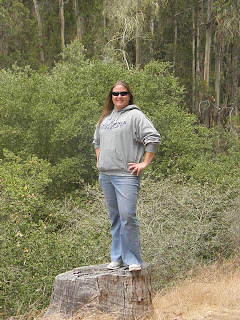 Now that Ghalien is finished and the manuscript is in the hands of my editor and beta readers, I've had a little bit of spare time to work on another Otherworld in the Mortal World installment.  The other day my two friends and I drove across the highway from my house and hiked down into the Black Lake Wetlands Preserve, the very place where Meghan encountered the faelah, the Cumorrig, and Cade for the first time.  Yes, the swamp behind her house really does exist, and so does the neighborhood where she and Tully live.  Of course, I did add a few extra details and I might have changed a few things, but if you ever wanted to visit the setting of the Otherworld Trilogy, you can do so on the Nipomo Mesa.

I have been visiting the wetlands since I was in middle school, but I have never been down there after dark.  To be completely honest, I'm not sure if I would like to visit at night, even if I had a group of friends with me . . .

The best part about the Black Lake Wetlands Preserve is that the traffic is practically non-existent.  In fact, I can remember seeing only a couple other people hiking in the area once or twice before.  Another plus is that the trees are very talkative, creaking and rustling in the wind and telling their secrets.  If you are looking for a natural place to recharge, this preserve is the place to go.  Maybe now you can understand why it made it's way into not just the Otherworld Trilogy, but into my Legend of Oescienne books as well.  If you've read The Finding or The Beginning, then you should be familiar with the Mystic Archedenaeh.  Denaeh calls the Belloughs of the Black Swamp her home.

Below I've included some more pictures and the video we created (just a reminder, this was filmed with my camera, so not the best equipment on the planet, and I have a fear of speaking in front of a camera (something I'm trying to get over :P)), but before I let you go to watch this little creation, I want to reiterate that although Meghan and her friends treated the Black Lake Wetlands Preserve as an extension of Meghan's backyard, there are rules that need to be followed if you should choose to visit (for example, fires are prohibited and there have been reports of bear activity in the area).  So, hopefully that doesn't scare anyone off, but I want to make sure everyone is safe should they decide to make their own little trip down into this Otherworldly realm . . .  With that being said, I hope you enjoy the video! 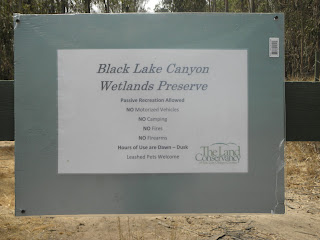 It may be daylight, but I've heard this place is crawling with creepy, Otherworldly creatures.  Best to keep a look out for them. 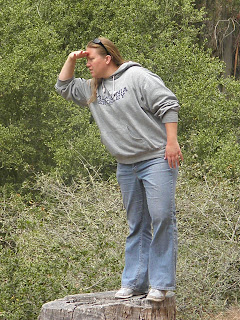 Okay, I swear something just moved down in the reeds, and luckily I have Laura to watch my back. 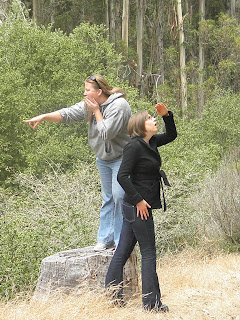 Unfortunately, Nino doesn't do so well in these sorts of situations . . . 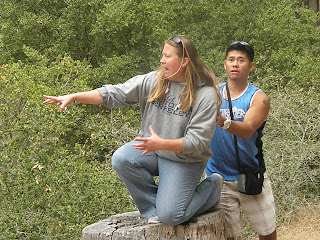 A wasps' nest we found on our hike.  Fortunately, they didn't notice us as we passed by. 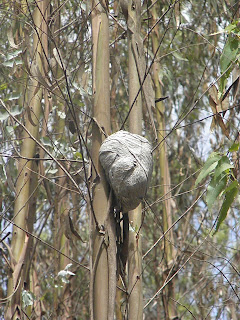 The canyon where Cade and Fergus fought with the mountain lion faelah in the beginning of Ehriad. 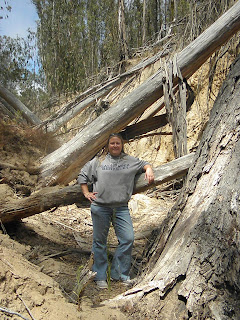 A eucalyptus tree that will soon join the others down in the canyon. 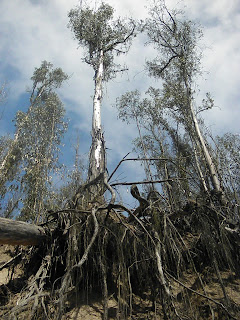 The point where the trail crosses the swamp.  It's dry now, but during the winter it can get pretty damp, hence the need for the board. 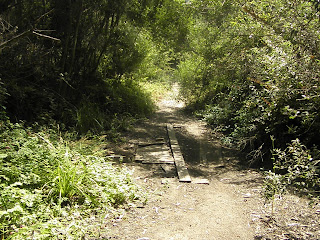 A few more trails you can take. 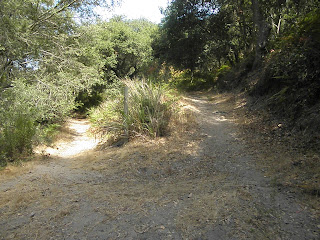 And now, the feature presentation!
Posted by AuthorJEJohnson at 9:05 AM