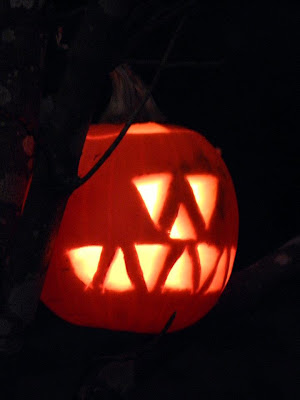 Hello everyone, and a happy Samhain season to you all!
As some of you might know, my favorite time of the year is fall and my favorite holiday is Halloween.  Of course, if you've read any of my books, you might have come to that conclusion already ;).  I'm taking a small break from all of my Otherworld Trilogy posts and instead I decided, in honor of Halloween/Samhain, I'd post two chapters from the second book in my Oescienne series.  I thought it would be fun to share a Halloween-themed story and since I don't really have any short stories I've written specifically for this wonderful, Otherworldly holiday, I decided a few chapters from The Beginning might fit the bill.
Before you read, however, I'd like to give a little information about the history of Halloween (don't worry, this is the basic version; what I've learned from my time spent studying the Celts).  Samhain traditionally takes place on November 1st or 2nd and celebrates the start of the Dark half of the year (we can also call it the Celtic New Year).  The Morrigan (Celtic goddess of war and battle and often depicted as a raven) and Donn (Celtic god of the afterlife whose animal symbol is a bull) are celebrated during this festival.
The Celts believed in an otherworld separate from our own and they also believed that on Samhain, the veil between the worlds grew thin and the spirits of this otherworld could easily pass into ours.  That is why we carve pumpkins (the Welsh used to carve turnips).  The jack o' lanterns are meant to frighten away the evil spirits.
So, as you go trick or treating or head out for a Halloween party next week, be aware that the spirits of the otherworld might very well be roaming the night with you . . .
Now for an excerpt to help get you into the Halloween spirit!  Enjoy!
- J.E. Johnson
p.s. These chapters are my favorites from The Beginning ;)


My belly paRts the sand as I move,
My back Reflects the sky.
In summeRtime I leave a gRoove,
In winteR, I am satisfied.

The five companions read the riddle several times, juggling the words over and over again in their minds.  Jahrra could hear Gieaun and Pahrdh whispering the words incoherently under their breath, and all around her the murmur of low voices ensued.
“The River!” Gieaun hissed frantically after a few minutes of reflection.  “It has to be!”  She looked up at her friends, the horse-head mask hiding the expression on her face.
“I think you’re right,” Pahrdh added, pulling down his own bear’s mask.  “Quick, back down the main road, the same way we came into town!”
“Belly parts the sand,” he was muttering as they walked quickly together back towards the river, “the river bottom running along the earth.  In winter the rains fill the river, and in the summer the river runs very low, leaving a groove.  It has to be it!”
The five of them moved quickly down the cobblestone road until they reached the traffic bridge fifteen minutes later, all breathing heavily and clutching their sides.
“Alright,” said Scede, panting from the combination of brisk walking and jogging, “I don’t think the next clue would be on the traffic bridge, but maybe on the foot bridge?”
“I think you’re right Scede,” Rhudedth added, tugging on his arm, “look.”
She was pointing down near the edge of the river, about a couple hundred yards away.  They could see the flickering light of a torch in the distance.  It stood still for a few moments before it began moving east up the riverbank.
“Quickly!” hissed Jahrra as she jumped past her friends, almost getting snagged on Rhudedth’s golden butterfly wings.  She didn’t even wait for them as she started running down the small dirt road that intersected the main street.
The fields were sunken below the town’s main avenues and the small dirt road they now traveled down ran parallel to the river’s natural levee to their left.  Jahrra knew that as long as they stayed on this road they’d eventually intersect the path leading up to the foot bridge.
About half of the fields had already been harvested and the twilight shadows cast by the baled hay and bundled corn added an unnerving effect to the spooky feel of this Sobledthe Eve.  Jahrra tried hard to block out the images of evil spirits and goblins her imagination couldn’t help but conjure up, and her stomach lurched when she recalled what Denaeh had once told them about the spirits of the dark.  Jahrra shook these dreadful thoughts from her mind and soon felt the cool fall air pulsing through her lungs as she jogged.  Before too long, the group reached the trail that climbed the levee up to the footbridge.  Jahrra grinned, her thoughts of evil spirits gone for the moment.
“Alright,” she gasped as her friends caught up, “the footbridge must be this way.”
They all climbed the steep levee to find that a narrow wooden bridge did indeed span the river ahead.  It allowed only two to pass together and had a railing to keep pedestrians from falling off.  In the center of the bridge there appeared to be some sort of plaque or sign attached to the railing.  Jahrra quickly slid over to it, threw back her mask, and began to read in the flickering torchlight that Pahrdh provided:


StrAight As the hAckles on A dog we stAnd, fluid yet rigid,
AlwAys clothed, And never bAre.
We Are AlwAys moving, except when frigid,
Yet we go nowhere.

The Various colors of fall adorn my lot,
across the Vast fields I roam.
Vermin prey upon me, though I hear them not,
both from aboVe and below the loam.


- Chapter Eleven -
Fright and Flight on a Sobledthe Night