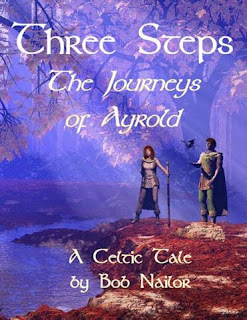 Title: Three Steps: The Journeys of Ayrold
Genre: Fantasy
Tagline: What do you do when your fantasies are actually your reality and three steps separate them?


The title actually went through several variations that weren't anywhere near the final.  Then one day the idea of three steps came to mind and when the hero's name was changed from Elric to Ayrold, suddenly the title worked.


Arthur Dunne because I used memories and impressions of my grandfather to create the character.  My grandfather was born in and with the twinkle in his eye, he always reminded me of a leprechaun and the tales he told me have lived inside all these years. I was eleven when he passed away.


Brelyn is my least favorite character only because he is an elf and I have always thought of them as nice and well, he wasn't.  Somehow I really feel Brelyn needed to see a shrink more so than Harry Corsi did.


5. If you could change thing about your novel, what would it be?  Why?


One thing?  After it was in print I thought of many things to change such as possibly making it a tad darker and expanding the battle scene somehow.  As to why?  Everyone loves to be scared and making the story darker would give the reader that extra little heart pulse.  And we all love a good battle scene, even Tolkien created an epic battle.


First, Three Steps could become a series since I have a couple of ideas for other adventures involving Ayrold, Arienne, Soth and Melyorn.  Second, I did an immense amount of research and much of the magic within the book is based on Wiccan methodologies and known properties of ingredients used, such as for the far-seeing segment.  Third, "Burl-me-up" definitely made my leprechauns unique and is based on a trip where I saw a huge 25-30 ft leprechaun at some location between and NW Ohio.


I am a gourmet chef and have won a few awards for my culinary skills and have taught over 50 boys (via the Boy Scouts) how to cook.


I attempt to keep my author web page as current as possible so you can always know what I'm up to at www.bobnailor.com and see what books I'm in or have out.  You can also check out this link that will take you directly to the book: http://www.bobnailor.com/book_ayrold.php


I am co-authoring with my buddy from a new series of vampire novels.  The story takes place (book 1) in and has so many fantastic historical moments in the tale to keep you wondering.  We are weaving history, religion and vampire fantasy together with an international flair.  The series we've outlined so far has five solid novels in it but it may expand.  On a personal note, I am hoping to have two more books out by June 2012; one an adventure type involving a clumsy for-hire relic hunter and the other a more literary fiction piece involving an Amish boy in 1961.


A tip to readers?  Enjoy the new technology but don't forget the old.  I love ebooks but still hanker for a real book from time to time.  Support both.  A tip to other writers? Stop writing, I don't need the competition. Just kidding.  Don't let your imagination go away and keep writing. Sometimes it is easier to start small with a short story in a collection.  But whatever, keep writing.


I'm glad to have this opportunity to talk a little about my book and myself. Thanks.  You may want to check out my other novel, 2012: Timeline Apocalypse.


The doctor leaned toward me and lowered his voice.  "I'm going to ask one question, Harry.  I want you to give it serious thought before answering."


I watched Dr. Hancock hold his pen absolutely still.  What scares me?  The dreams had, no, they still do.  They hadn't gone away.  They were with me, had been with me all my life and just got more vivid each time.  But did they really scare me?  I chewed on my thumbnail and gazed at the doctor as he watched me. My life scared me.  Not knowing what was coming next and not understanding what was happening now.  I feared my life, or, non-life.  The missing years scared me.


"Ah, interesting.  Thank you, Harry.  Well, even if you don't think so, we have made some progress.  Your color's changed."  He smiled at me.  "Small attempt at humor.  I'll go over the tape later.  Maybe something will come up."  He stood and we shook hands.


I turned and headed for the door.  A faint aroma tickled my nose.  "Do you smell that?"


"Do you mean that damnable taco stink?"


"No, not taco.  It reminds me of something.


"Well it isn't air fresheners," Hancock said.  "I tried to use some but they couldn't cover or hide that taco smell.  So I don't waste money on those anymore."


"Yes, yes," he replied as he lifted his head and sniffed the air.  "It reminds you of what?


I watched as he took short quick breaths, sniffing.


"Honeysuckle," I exclaimed.  "I think it smells like honeysuckle."

"Well, if you smell honeysuckle, more power to you.  All this," Hancock pointed to his nose, "can smell is tacos.  God, I loathe tacos."
"My parents had a honeysuckle arbor in the back yard.  I'd go out and play, you know, a brave prince fighting evil dwarves to save the fairy princess."  I looked blankly at Hancock.
"Interesting.  Go on."  He started the tape again.
"Shit.  That had to have been when I was a kid and hadn't remembered it until this very moment.  Still something doesn't seem correct, it wasn't my parent's house, nor even the garden arbor.  Wow.  That honeysuckle scent is so strong now and reminds me of I-270 just south of   I used to drive through there just to smell the honeysuckle on my way back and forth between and my folk's house.  I'd roll my windows down and just let the scent of honeysuckle embrace me."
"Yes, yes.  Very good.  Since you want to digress elsewhere and your hour is over, we'll pick this up at the next meeting.  I have a convention to attend but you'll not get away from this arbor and prince story.  Next meeting, for sure.  Think over the idea of hypnotic regression, it might just be the avenue we're looking for."  Doctor Hancock eased me toward the door.  "Anyway, if I could smell honeysuckle instead of taco, I know that I could say I was blessed.  I'll make an addendum to the notes referencing your ability to smell honeysuckle over tacos."
As I reached for the door, my pager beeped.
"The office," I said, and looked at Hancock.
"Go ahead, use my phone."  He motioned me back into the office.
"Be just a second," I said while walking over to the phone and dialed Kim, the office receptionist.
"Harry, sorry to bother you, but a Mr. Dunne called a few minutes ago.  He seemed very insistent on reaching you."  Her voice grated on me.
I spoke quietly.  "Thank you, Kim.  Who is he?"
"I have no idea.  He left me a phone number and said it was imperative that I get it to you as soon as possible.  Something about your parents."
"My parents?" I said and could feel my eyebrows furrow.  "The phone number?"  I pulled my notepad and pen from my jacket.
"It's 202-555-2950.  He's staying at the Sheraton Hotel, room three dash fifty.  He said it was near the Woodley Park Metro.  That's Dunne, D-U-N-N-E, first name is Arthur."
My hand fumbled trying to keep the pen from falling from my fingers.  "?  Thanks, Kim."
"Hope it's not bad news.  So, how's the date going?  Still got your clothes on?"
"Please, Kim.  I'm not out on some clandestine affair.  I'm at the doctor's office.  Give it a break.  Robert Hancock is a doctor.  Look it up."
I slammed the phone down.  Perhaps I'd still have a job tomorrow.  I knew Kim would check the information and it would quickly become office gossip.
"Nothing important," I said on my way out.
"Are you certain?" Hancock asked.  "Your aura wavered while you spoke.  I hope it was good news."
"I'm not sure.  Someone needed to see me and it's just a coincidence that he's staying across the street.  I'll call you later for another appointment?"
Dr. Hancock nodded and stared at me, almost through me. It was obvious he was in deep assessment.
"Something tells me I won't be hearing from you."
"Thanks," I said then frowned at his words.  "I won't be coming back?"
Hancock shrugged then passed his fingers near me, touching an unseen edge a couple of inches from my head and shoulders.
"No.  I don't think so," he replied absently. "Things change and you're changing.  Good luck."

*****
Thank you Bob for taking part in my Author Spotlight interview!  I hope your writing continues to flourish and we hope to see more of you in the future.
*****
If you or an author/illustrator you know is interested in being interviewed, feel free to send me an email at jejoescienne@yahoo.com
Posted by Jenna Elizabeth Johnson at 12:00 AM